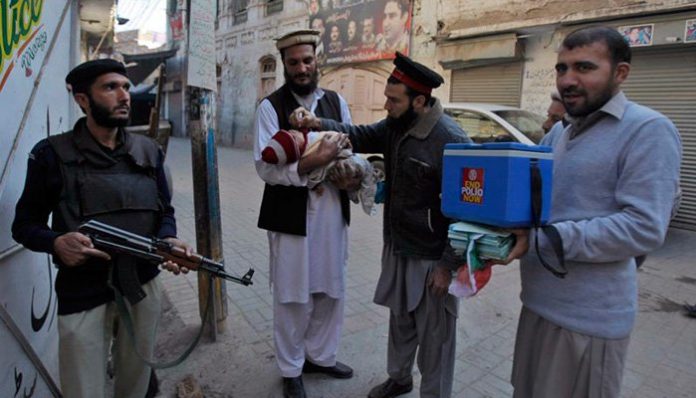 SWABI: Section-144 has been imposed in Swabi after attack on polio vaccination team after which pillion riding has been banned in the district.
According to a notification issued from the deputy commissioner’s office, Section-144 has been imposed in the district due to security concerns during the ongoing vaccination campaign.
A police spokesman said the district police officer has strictly directed to make sure that the ban on pillion riding and display of arms is implemented strictly. Those violating the rule will face strict action. Police has appealed to the people of the district to cooperate for ensuing law and order.
On Wednesday, two women polio workers were killed in firing by unidentified armed men in Swabi. Polio vaccination campaign was temporarily suspended in the area after the attack.
On Thursday, the campaign was restored with enhanced security for the vaccinators. The campaign was also affected as some of the polio workers were reluctant to go for duty owing to security concerns. They were demanding adequate security measures for the vaccinators during the campaign to save them from attacks.
Deputy Commissioner Shahid Mehmood held consultations with the police and health officials and formed a new strategy to continue the vaccination campaign. Khyber Pakhtunkhwa Inspector General Police Sanaullah Abbasi was also given a briefing about the security of the campaigners, normal, sensitive and most sensitive regions in the district and the previous operations conducted against terrorists in the Razaar tehsil of Swabi where the attack on polio team happened on Wednesday.
Security measures for vaccinators in other parts of KP were also increased after the Swabi incident.
The Emergency Operations Centre (EOC) Coordinator Dr Rana Muhammad Safdar also visited the site where the incident took place in Swabi. He said the campaign was suspended in few selected union councils after the incident. Dr Safdar said 47 people have died in such attacks since 2012. He praised the resolve of polio workers for performing their duties despite so many challenges.
Meanwhile, the provincial government formed a three-member committee to investigate the murder of two women polio workers. According to an official notification, the committee has been mandated to thoroughly investigate the incident and file its report within three days.