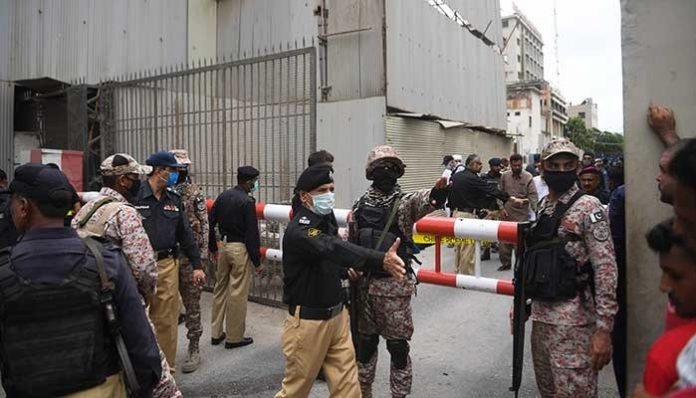 KARACHI: Following a successful operation against a terrorist attack at the Pakistan Stock Exchange (PSX), Sindh Rangers Director General (DG) Major General Omer Ahmed Bukhari told that the Rangers, police and private guards killed four terrorists in just eight minutes.
Major General Omer Ahmed Bukhari held a news conference on Monday and told that the PSX was attacked at 10:02 AM and all four assailants were killed at 10:10 AM before they could enter the building.
“The terrorists resorted to straight firing which injured some civilians. Two of the attackers were killed at first entrance as the Rangers and police officials retaliated against them. Routine work is ongoing at the PSX.
“The assailants had a plan to hold people hostage inside as there are over a thousand employees at the PSX. The attackers had brought food items with them and wanted to damage Pakistan’s economy.
“The terrorists did not succeed in any of their targets and the attack, which holds similarities with the Chinese consulate incident, will be thoroughly investigated. There has been no terrorist incident in Karachi for one-and-a-half years and we should be proud of our security forces.”