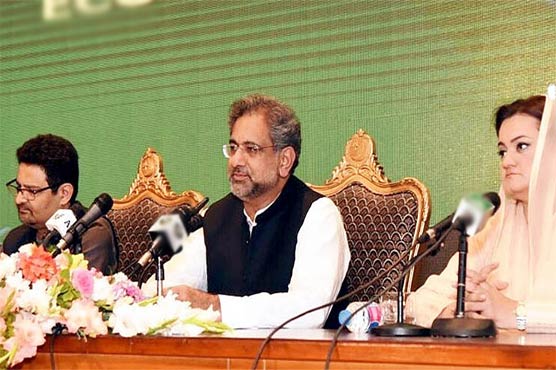 ISLAMABAD: Former premier Shahid Khaqan Abbassi said that the inflation in the country is increasing gradually. He said the inflation rate will touch 12 % in next fiscal year.
Talking to a presser, the PML-N senior vice president expressed that the government’s experiment to control soaring inflation has failed, adding that the petroleum prices were increased despite a decrease in the international market. He said the PTI led government has made the country an inflation state.
Abbassi asserted that if PML-N’s government was handling the economical matters artificially then this government must try that because situation was much better at that time. He said PML-N was not fighting for power but for the poor of the country.
The senior politician said that a reduction of 90 % in the budget of PSDP is alarming. He said the finance advisor must tell how the new businessmen will enter the market. Abbassi said the foreign loans of the country would rise to 50,000 billion if this government remains in power, adding that unemployment would also increase with these policies.
He expressed that policy rate has risen to 12 % that was at 6% during PML-N’s rule. He added that not a single penny wad added to tax revenue by this government. He said the government’s expenditures have risen to 5700 billion which were at 4000 billion in previous governments’ rule.
He quipped that it has been proved now that government could not reduce its expenditures by selling buffalos.
He said the historic increase in electricity tariff was made to burdenize public. Abbassi said a clear comparison can be made by viewing country’s economy from May 2018 to May 2019. He said the rupee was devalued by Rs 27 in one year. He said the price of sugar was raised by 30 % while the price of flour was increased by 10 %.