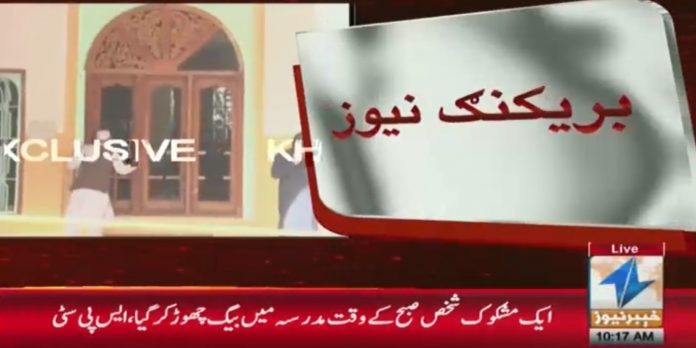 PESHAWAR: At least seven students embraced martyrdom and more than 70 others injured in a blast at a madrassah in Dir Colony Peshawar on Tuesday morning, Khyber News reported. Those killed and injured include madrassah students aged between nine and 15 years. Health officials fear that the death toll from the blast may rise as many of the injured are in critical condition.

The police and rescue teams reached the crime scene and launched the rescue operation. According to Rescue 1122, the injured have been shifted to Lady Reading Hospital (LRH) where the condition of several of them is stated to be critical. Witnesses say a man brought a bag inside the seminary, after which the explosion occurred. The spot of the explosion has been cordoned off with investigators collecting evidence.

A police officer said initial reports suggest an improvised explosive device (IED) was used in the blast with five Kgs of explosives and ball bearings. The blast ripped through the seminary at a time when Quran class was ongoing. This is a second blast in less than a week. At least 15 people, including Deputy Superintendent of Police (DSP) Ammanullah, were martyred and scores injured after a blast ripped through a mosque located in Quetta’s Satellite Town area on Sunday.