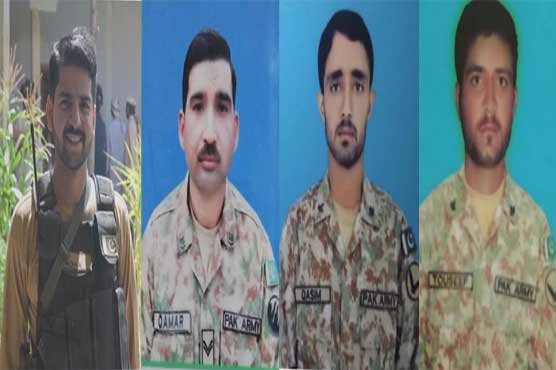 RAWALPINDI: Four Pakistan Army soldiers were martyred on Wednesday during an intelligence-based operation (IBO) on a terrorist hideout in Datta Khel in North Waziristan.
According to a statement issued by the Inter-Services Public Relations (ISPR), seven terrorists were killed during the exchange of fire.
The military’s media wing said the forces, acting on a tip-off, carried out the operation on a terrorist hideout in the Datta Khel area.
The martyred soldiers were identified as Lieutenant Agha Muqadas Ali Khan, Hawaldar Qamar Nadeem, Sepoy Muhammad Qasim and Tauseef.
Security forces have also recovered huge cache of weapons from the hideout of the terrorists.