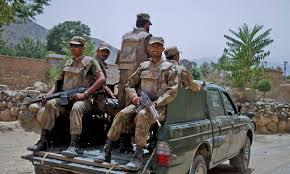 QUETTA: Frontier Constabulary (FC) launched an operation in Awaran area of Balochistan on Saturday and killed several militants including key commanders of banned outfit Baloch Liberation Front (BLF).
According to Balochistan Interior Ministry, the killed terrorists were involved in killing of 44 personnel of FWO and were also involved in spreading terrorism in the province.

The sources further informed that the dead militants were also involved in Turbat and Mastung tragedies. Large quantity of arms were also recovered from them.