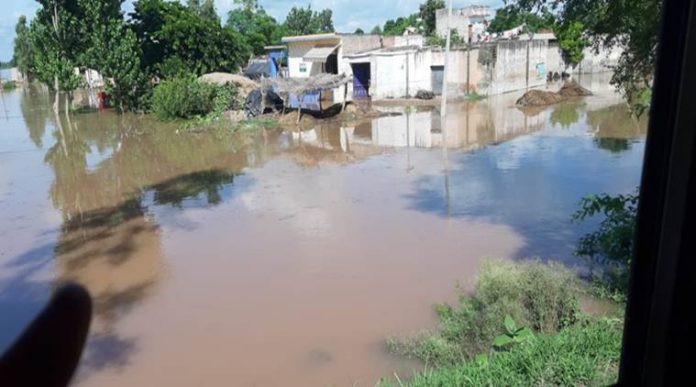 KASUR: Dozens of Pakistani villages were submerged and scores of people evacuated after India released up to 38,000 cusecs of water into River Sutlej without intimation earlier this week.
Over 50 villages were submerged near the Sutlej on Wednesday, including areas in Kasur, Chachran Sharif, Kot Mithan, Chanda Singhwala, Gati Kalanger, Mastayki, and Bhikiwind. Crops stretching over hundreds of acres near the bed of Sutlej were also destroyed by the flooding.
Rescue 1122 and Pakistan Army personnel were busy transporting residents of the affected villages to safety.
The National Disaster Management Authority (NDMA) had earlier warned of a flood-like situation in the areas alongside River Sutlej, after India decided to release up to 200,000 million cusecs of water into the river without notifying the relevant authorities.
The water level at Ganda Singh Wala was 17.8 feet with 37,640 cusecs on Tuesday, and was expected to reach up to 100,000 -150,000 cusecs by Wednesday, according to NDMA spokesperson Brigadier Mukhtar Ahmed.
He further said all federal and provincial bodies were ready to cope with any untoward situation.
On Monday, Pakistan Commissioner for Indus Waters Shiraz Jamil Memon said India had suspended the Indus Waters Treaty and stopped all kinds of data sharing related to the water agreement between the two countries. India also did not notify Pakistan about releasing additional water into River Sutlej, the official said.
However, on Tuesday morning Pakistan’s office of the commissioner for Indus waters finally received a letter from its Indian counterpart stating that the data was being shared under the treaty.