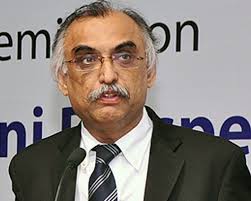 ISLAMABAD: Syed Muhammad Shabbar Zaidi on Monday has been sacked from the post of Federal Board of Revenue (FBR) Chairman.
According to details, Federal Cabinet has approved the appointment of Nosheen Javed, a grade-22 officer, as Shabbar Zaidi’s replacement.
It is to be mentioned here that Shabbar Zaidi was on leave for an indefinite period. However, in his absence, Nosheen Javed was handling all the affairs.
Zaidi is a chartered accountant who has been serving as the 26th chairman of the FBR.
Previously, he served as a provincial minister of Sindh during the 2013 caretaker setup. He was the territory partner of PwC Pakistan.
He is a fellow member of the Institute of Chartered Accountants of Pakistan and also served as president of the Institute from 2005 till 2006. He had also been working with A. F. Ferguson & Co., a member firm of PwC since 1969.
Among his non-profit work, he is a trustee of Sindh Institute of Urology & Transplantation (SIUT) and member of Boards of Governors of Liaquat National Hospital and Karachi School of Business and Leadership (KSBL).
He was also the president of the Institute of Chartered Accountants of Pakistan and the chairman of the South Asian Federation of Accountants (SAFA).
Shabbar Zaidi has also authored many books, including Panama Leaks – A Blessing in Disguise – Offshore Assets of Pakistani Citizens, A Journey for Clarity and Pakistan: Not a Failed State.
As FBR’s chairman, he had introduced the Asset Declaration Scheme, whose deadline was July 3, 2019, by any measure, this scheme was considered as the most successful asset declaration program in the history of Pakistan.