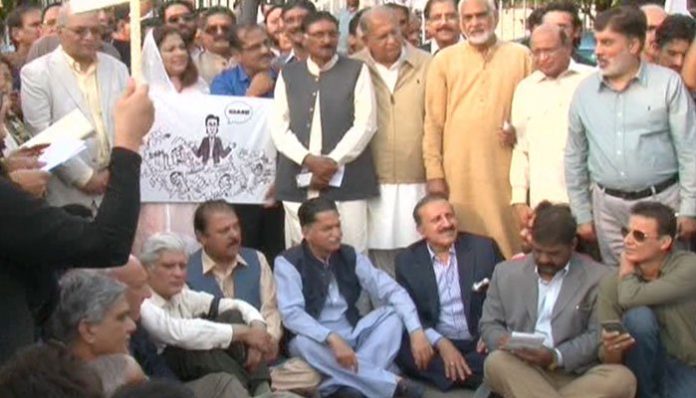 ISLAMABAD: The Pakistan Muslim League-Nawaz (PML-N) and its allied parties parliamentarians Thursday held protest demonstration outside Parliament House against arrest of opposition leader in National Assembly Mian Shahbaz Sharif.
Former speaker Ayaz Sadiq was leading the protesting parialmentarians, who condemned the arrest of PML-N president Shahbaz Sharif. They were holding placards and raising slogans against arrest of their opposition leader by the NAB. The JUI-F, National Party and PkMAP’s members also spoke on this occasion.
PML-N leader Rana Tanveer Hussain condemned the arrest of Shahbaz Sharif, saying that he served Punjab to the best of his capabilities. “The entire world praised Shehbaz’s work and acknowledged his good governance. He transformed Punjab,” he said.
Pakhtunkhwa Milli Awami Party Senator Usman Kakar also condemned the arrest and claimed Senate and General Elections 2018 were rigged.