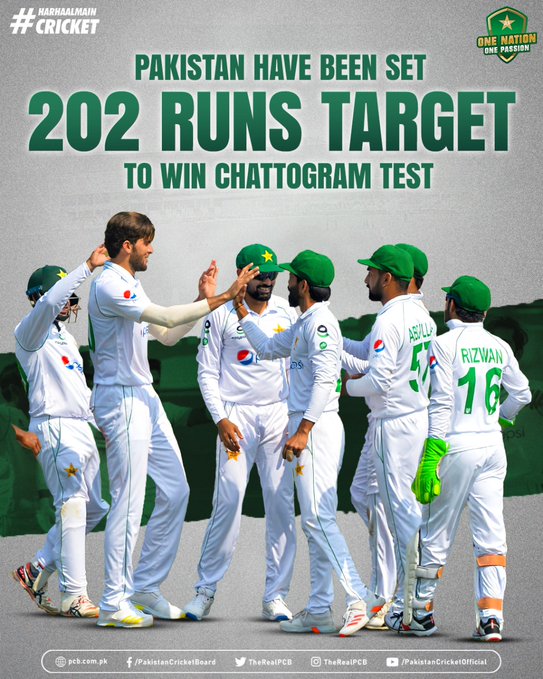 The pacer expressed happiness at the decision, saying that he always tries to get Pakistan to win matches through his bowling.  He spoke about hunting batters with bowling partner Hasan Ali, who is also in spectacular form these days.

“I enjoy bowling with the new ball. We [Shaheen and Hasan] back each other and try to get wickets while bowling in tandem. Even in the second innings, we kept the pressure from both ends,” he said.

Pakistan needs 202 runs to win the second Test match as spinner Sajid Khan and pacer Shaheen Afridi rattled the Bangladeshi batting order to dismiss the hosts on 201 runs on Day 4.  The fourth day of the first Test match between Pakistan and Bangladesh resumed on a good note for the visitors Monday when fast bowler Hasan Ali provided the Men in Green an early breakthrough followed by Sajid Khan’s dismissal of Mehidy Hasan.

Bangladesh, batting to survive and give Pakistan a fighting total, were five wickets down before they reached three figures on the scoreboard.

Hasan Ali bowled out Mushfiqur Rahim during the first session, taking the fifth Bangladeshi wicket and making things increasingly difficult for the hosts. First-innings hero Liton Das was dismissed by a clinical Shaheen Afridi, who took another fifer. Shaheen then dismissed Abu Jayed before Sajid Khan made short work of Taijul Islam to dismiss Bangladesh for 201 runs.

Earlier, a fast paced bouncer from the lanky Shaheen Afridi hit Yasir Ali on the helmet leaving the dazed batter with no choice but to return to the pavilion, retired hurt.