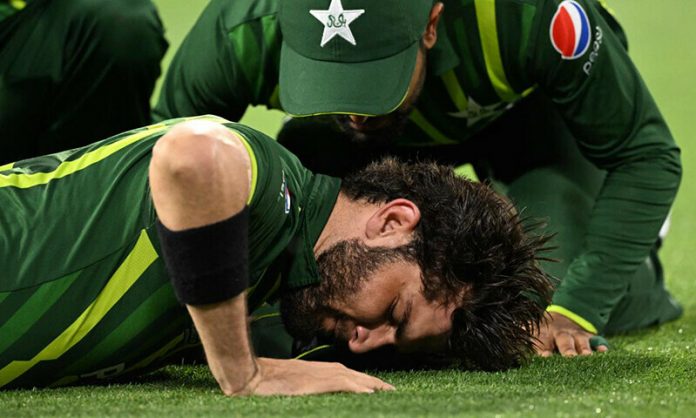 The three-match series will commence from December 01 and will be played at three venues, Karachi, Lahore, and Rawalpindi.

The left-arm pacer hurt his knee while completing a catch during the T20 World Cup final at the Melbourne Cricket Stadium.

He didn’t complete this spell, as England lifted the T20 World Cup for the second time. The Men in Green are now in line to host England for three World Test Championship matches.

Shaheen will undergo a full medical scan on his return to Pakistan and in light of the reports, a rehabilitation plan for the left-arm pacer will be arranged, sources said.

Moreover, it has been decided to rest the 22-year-old instead of taking the risk of playing him.

During his absence, pacer Haris Rauf is likely to make his long-awaited Test debut. He would be joining Naseem Shah and in-form pacer Mohammad Abbas for the series.

The squad for the series is expected to be announced next week after the consultation process.

There is also a possibility of Abrar Ahmed’s inclusion in the side, while former captain Sarfaraz Ahmed would be retained in the squad.