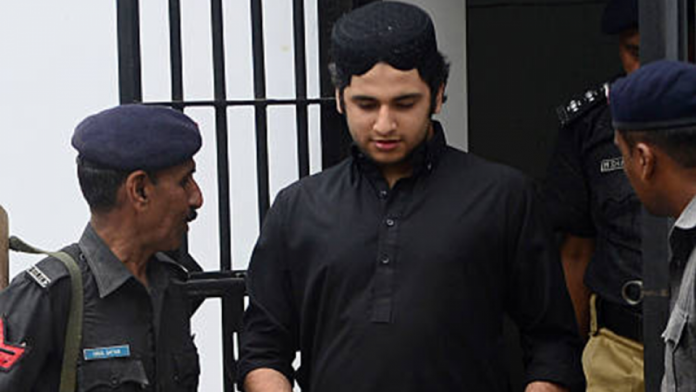 KARACHI: The Sindh High Court on Monday commuted the death sentences handed to Shahrukh Jatoi and Siraj Talpur in the Shahzeb Khan murder case into life in prison as it announced its verdict on their appeals against conviction in the case.
A two-judge bench had reserved its verdict on the appeals on March 11.
An anti-terrorism court had sentenced Shahrukh Jatoi and his friend Nawab Siraj Ali Talpur to death in June 2013, while two other co-accused were awarded life imprisonment for killing 20-year-old Shahzeb Khan on Dec 25, 2012 near his home in the Defence Housing Authority.
In 2013, Khan’s parents had decided to pardon the culprits responsible for the murder of their son.
The convicts, through their counsel, filed appeals in the SHC against the conviction while Shahrukh had also filed a criminal review application contending that he was a juvenile at the time of the offence.
In Nov 2017, a two-judge bench of SHC headed by Justice Salahuddin Panhwar had set aside the conviction and sent the case to a sessions court for fresh trial and to decide the compromise as well as other applications with an observation that the offence did not come within the parameters of the ATA. Later, the sessions court had released Shahrukh and others on bail.
Thereafter, around 10 civil society activists challenged the SHC judgement before the Supreme Court. The apex court converted the appeals into a suo motu case under Article 184(3) of the Constitution and in February 2018, set aside the SHC judgement and remanded the case back to the SHC with the direction that the appeals be decided by a different bench of the SHC within two months.