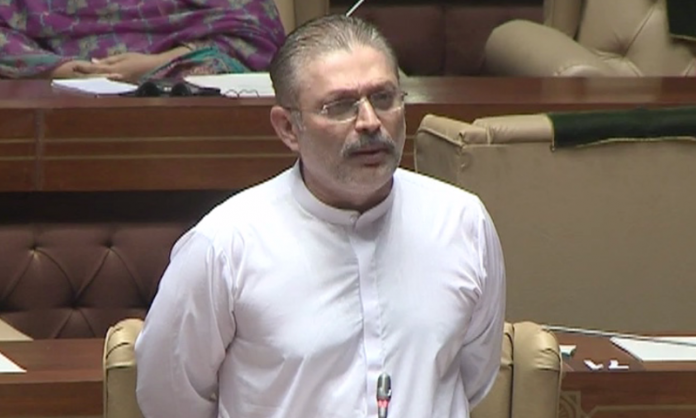 KARACHI: Former Sindh information minister and Pakistan Peoples’ Party provincial legislator Sharjeel Inam Memon deplored the dual standards of the National Accountability Bureau (NAB) on Wednesday.
He was addressing the Sindh Assembly session.
Earlier, Memon reached the premises to attend the session on Wednesday in a police escort.
Memon, a suspect in a Rs5.7 billion corruption case, was taken by authorities from the lockup to the assembly amid high security. He is on judicial remand until November 4.
On his arrival, Pakistan Peoples’ Party activists welcomed Memon by raising party slogans and throwing rose petals on him. The former minister refused to speak with journalists by saying that he will give his views after the session.
Earlier, the assembly’s secretariat sent a letter to the authorities concerned to ensure that the arrested former provincial information minister could attend the assembly’s session.
It read: “The Honourable Speaker, Provincial Assembly of Sindh, in exercise of powers vested upon him under sub-rule (2) of Rule 82 of Rules of Procedure of the Provincial Assembly of Sindh has summoned the above-subjected member to attend the current session of the Provincial Assembly of Sindh till prorogation, which will commence on Wednesday. In this regard you are, therefore, requested to please ensure the production of Mr Sharjeel Inam Memon in the next session.”
On October 23, Memon was arrested by the National Accountability Bureau (NAB) after hours of being holed up in court premises. He was taken into custody as he left the court. Memon was shifted to NAB headquarters Sindh after being escorted from the court.
“The accused persons are charged for embezzlement of Rs. 5,766,479,766 purportedly paid to seven advertising agencies for awareness campaigns between 2013 and 2015,” said a press release by NAB.
The accused persons jointly and severally in connivance with each other have been alleged for awarding the contracts to favour certain advertising agencies and to their own favour, in violation of relevant laws and rules and against exorbitant rates,” added the release.
He was attempting to avoid being arrested by NAB after the cancellation of his bail extension plea by the Sindh High court.
Memon, who returned to Pakistan in March this year after ending his near two-year-long self-imposed exile, was arrested on his arrival by NAB but later obtained bail.
The other accused in the case include bureaucrats, officials of the information department and members of private advertising agencies.
Memon claims the charges against him are politically motivated.