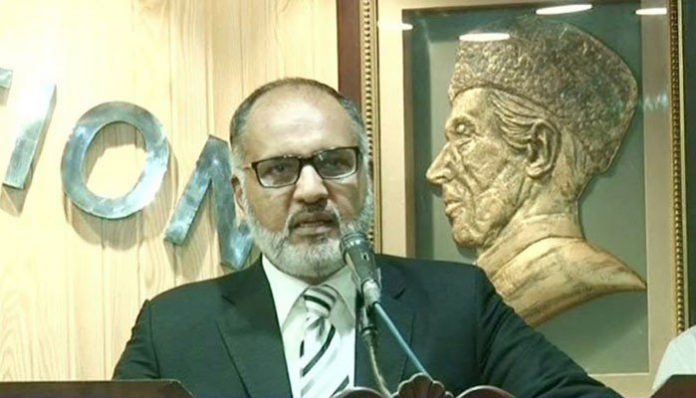 ISLAMABAD: Former Islamabad High Court (IHC) judge Shaukat Aziz Siddiqui on Friday challenged the Supreme Judicial Council’s decision removing his as a high court judge.
In his constitutional petition, filed in the Supreme Court under Article 184(3) of the Constitution of Pakistan, Siddiqui stated that he was discriminately sacked on account of making a public speech.
The former IHC judge contended that he has been sacked without a proper inquiry to prove his claims in the speech he delivered at the Rawalpindi Bar Association.
He also alleged that the SJC order “suffered from various illegalities and malafides” and prayed to the apex court to set aside the notification and restore his position as IHC judge.
In his appeal, Siddiqui stated: “In view of the historical evolution of procedure for removal from high public office through an impeachment under the public gaze and open proceedings, the action against the petitioner [Siddiqui] is violative of rule of law and judgements of the Supreme Court of Pakistan.”
The former IHC judge also claimed that SJC members were biased against him, saying that his removal “in an illegal manner was part of [a] preconceived plan of the worthy chairman of the SJC who intended to deprive the petitioner judge [Siddiqui] from becoming the chief justice of [the] Islamabad High Court. A plan is now afoot to bring ‘his man’ as a chief justice of [the] Islamabad High Court This is itself sufficient ground to establish the malafide exercise of power by the Chairman.”Siddiqui pleaded the apex court to withdraw the notification of his removal and restore him as IHC judge.
President Arif Alvi had removed Siddiqui as judge of the Islamabad High Court (IHC) on the recommendation of the Supreme Judicial Council (SCJ) on October 11.
The decision was taken by five members of the SJC led by Chief Justice of Pakistan Saqib Nisar. Other judges on the panel included: Justice Asif Saeed Khosa, Justice Gulzar Ahmad, Lahore High Court’s Chief Justice Yawar Ali and Chief Justice of the Sindh High Court Justice Ahmed Ali Sheikh.
Justice Asif Saeed Khosa, who is senior most among SC judges, wrote in the 39-page report that Justice Siddiqui did not even spare the Supreme Court when he remarked that he knew who sent messages to the apex court and who delivered them.Such reckless and irresponsible conduct of a high court judge was “not countenanced by any standard of judicial propriety and the Code of Conduct in this country is no exception in that regard”, the report stated.
The SJC had unanimously opined that while delivering the speech before the District Bar Association in Rawalpindi on July 21, “Siddiqui, an IHC judge, displayed a conduct unbecoming of a high court judge”.
On July 20, Shaukat Aziz Siddiqui had made serious allegations against personnel of a security agency, claiming that they were manipulating judicial proceedings. He also claimed the agencies approached the IHC chief justice to ensure Nawaz Sharif and Maryam Nawaz remained behind bars for the elections.
On July 31, the SJC had issued a show-cause notice to Justice Siddiqui on the reference for making unnecessary and unwarranted comments by accusing the establishment of manipulating the judicial proceedings.