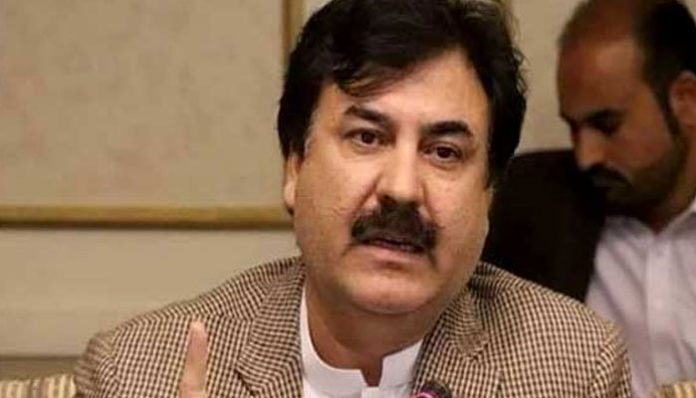 PESHAWAR: The Khyber Pakhtunkhwa government has issued yet another deadline for completion of the much-delayed Peshawar Bus Rapid Transit project (BRT), saying that it will now be operational by April this year.
The Khyber Pakhtunkhwa Information Minister Shaukat Yousafzai made the announcement on Tuesday through a television talk show.
Yousafzai said the final phase of the BRT project will be completed by Feb 15, adding that 50 buses are available to start the service.
The minister said training of the staff and drivers of the project is currently underway and the government would be able for a test run of the project in April.
Replying to a query, Yousafzai said, the government assured Supreme Court for the timely completion of the project in June last year.

Also read: Construction work on BRT Peshawar in final stages: Shaukat Yousafzai
The provincial government and the project’s executing agency, the PDA, had earlier promised to open the project, launched in Oct 2017, within six months on April 20, 2018. However, the deadline was missed. The project managers kept changing the launch dates from May 20 to June 30 to Dec 31 in 2018 to March 23, 2019.
It merits a mention here that the project’s cost has also jumped to Rs68 billion from earlier Rs49 billion.
The Supreme Court on Monday had stopped the Federal Investigation Agency (FIA) from probing alleged irregularities in the Peshawar Bus Rapid Transit project.
A three-member bench of the apex court headed by Justice Umar Ata Bandial announced its verdict on the Khyber Pakhtunkhwa government’s petition challenging a Peshawar High Court order from November 2019 directing the FIA to conduct an inquiry into different aspects of the bus project.
On November, 14, the PHC had handed down the judgment on BRT Peshawar and directed the FIA to probe the Project and submit the report within 45 days.