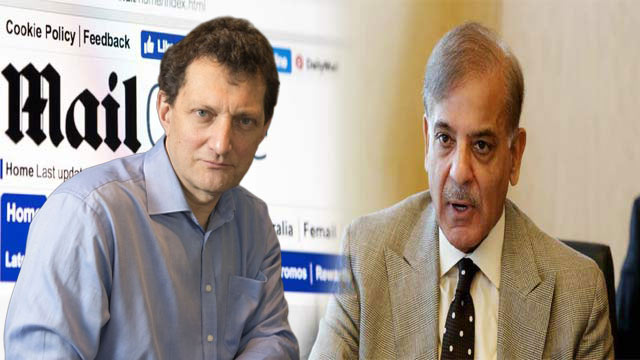 LONDON: Pakistan Muslim League-Nawaz (PML-N) President Shehbaz Sharif has filed a case in the London High Court against British newspaper Daily Mail and its reporter David Rose for publishing a “fabricated and defamatory” report against him in July last year.
“It was a fabricated and defamatory story which published in the Daily Mail. It was a part of propaganda launched by [Prime Minister] Imran Niazi against the PML-N in the name of sham accountability,” he said while addressing a news conference in London on Thursday.
Refuting the allegation made in the Daily Mail report, the leader of the opposition in the National Assembly said, “If there was a shred of evidence against him of siphoning off millions of ponds the unholy alliance of NAB and PM Imran would not have filed baseless references against him in Pakistan.”
On July 14, 2019 the story appeared in the British newspaper accusing former Punjab chief minister Shehbaz Sharif and his family of embezzling millions of pounds out of £500 million aid lent by the Department for International Development (DFID) for 2005 earthquake victims.
As soon as the report surfaced, the PML-N termed it a conspiracy against Shehbaz hatched by the PTI government.
Soon after the report stated making headlines, the PM’s aide on accountability, Shahzad Akbar, had endorsed the Daily Mail story and challenged Shehbaz to file a lawsuit against him in the London court.
He claimed that the government had ‘undeniable evidence’ to establish that the assets accumulated by the PML-N president’s family were made through money laundering and illegal means.