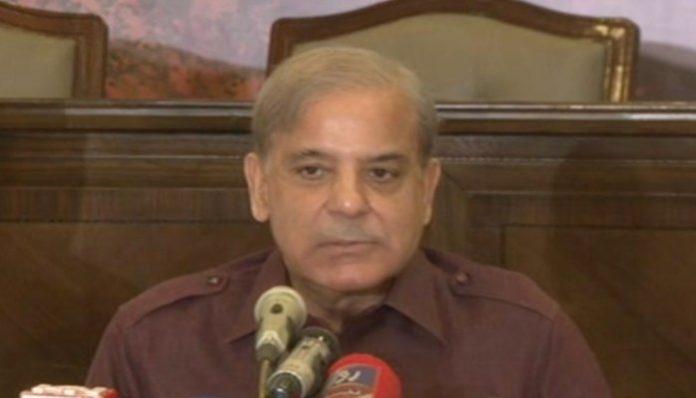 LAHORE: Pakistan Muslim League-Nawaz (PML-N) President Shehbaz Sharif on Saturday asked Prime Minister Imran Khan to form parliamentary commission for probe into the election rigging and recalled that on the day of the election for PM, Imran assured him that a parliamentary commission will be formed to probe into opposition’s rigging allegations.”However, three weeks have passed and a parliamentary commission has still not been formed,” Shehbaz lamented.
While addressing a press conference alongside former premier Shahid Khaqan Abbasi, Ahsan Iqbal and Marriyum Aurangzeb in Lahore, Shehbaz Sharif said Prime Minister Imran Khan did not come into power through votes. “PM Imran was not elected but came into power through rigging,” the PML-N president said. “We will ensure that a commission is made at any cost,” he added.
Further, the PML-N president urged, “PM Imran should fulfill his promises.”
Shehbaz also said, “I present myself before the nation for accountability.”
The PML-N president further regretted, “The PTI-led government increased gas, electricity and fertiliser prices just 20 days after assuming office.”
Upholding that such a “massive increase in prices has never been announced before at once”, Shehbaz said, “We will become the voice of the farmers and the common man.”
Speaking about Prime Minister Imran Khan’s presser a day earlier calling for the construction of dams, the PML-N president said, “We spent Rs122 billion for the construction of Basha Dam.”
“You do not need to collect funds for Diamer-Basha Dam but should attract investors,” he further said.
“There should be no delay in power production through Basha Dam,” he asserted.
Shehbaz further said that PML-N’s performance regarding power generation in Khyber Pakhtunkhwa “is in front of the nation”.
The PML-N president also criticised the new federal government’s decision to end the ex-premier’s laptop scheme.
“Laptops were not given to politicians or the rich but to students who achieved top scores and needed them,” he said.
This is the age of information and technology and you are depriving the poor of the facility to access information through laptops, he added.
Regarding PM Imran’s decision to auction PM House’s luxury cars, Shehbaz said, “We held an auction of cars at Qaddafi Stadium.”
Further, taking a hit at PM Imran’s austerity drive, Shehbaz said, “We ate daal chawal during meetings and only made special arrangements during visits of foreign dignitaries.”
Urging the new government to waste people’s time, Shehbaz said, “I have never used a government residence.”