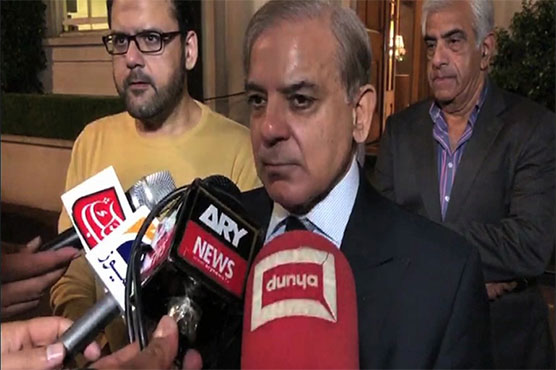 LONDON: Pakistan Muslim League-Nawaz (PML-N) president Shahbaz Sharif reached London on late Wednesday night to attend the funeral of Begum Kulsoom Nawaz scheduled to be held in Regent Plaza Park, London today (Thursday).
Talking to media in London, Shahbaz Sharif termed Kulsoom a brave woman and stated she played vital role in reshaping the political landscape of the country.
Shahbaz Sharif and other members of the family will return to Pakistan on Friday at 6am along with Kulsoom’s body.
The body of former first lady will be flown from Heathrow airport on Thursday at 10pm PST via PIA flight PK-758. Nawaz Sharif sons Hassan and Hussain Nawaz will not return to Pakistan to attend the funeral prayers of their mother owing to legal complications.
A second funeral prayer will be offered after Friday prayer in Raiwind following which Kulsoom will be buried alongside her father-in-law, Mian Sharif, at Jati Umra.
Begum Kulsoom Nawaz, the wife of former prime minister and Pakistan Muslim League-Nawaz (PML-N) supremo Nawaz Sharif, passed away at London’s Harley Street Clinic on Tuesday after a prolonged battle with cancer.