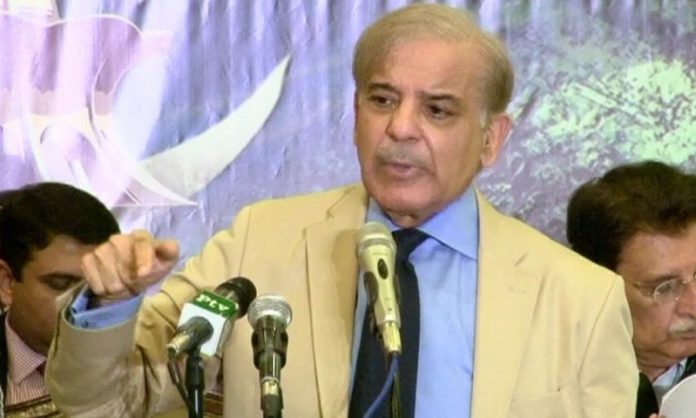 LAHORE: Pakistan Muslim League-Nawaz (PML-N) president Shehbaz Sharif on Thursday unveiled his party’s manifesto for the upcoming general elections with the pledge of constructing dams and water reservoirs after assuming power.
Senior PML-N leaders were also present on the occasion of the party’s manifesto unveiling ceremony.
Addressing a ceremony of unveiling PML-N manifesto in Lahore, Shehbaz Sharif claimed that the PML-N had introduced 11,000MW electricity to the national grid in its recently-concluded five-year tenure. Shahbaz said his party had brought peace to the entire country, especially Karachi, through military operations.
In it’s manifesto, headlined with the slogan “Vote ko izzat do — khidmat ko vote do” the party has pledged to aspire for economic transformation by raising the GDP growth rate to over 7 per cent. In its manifesto, PML-N also pledged to expand scope of investments. The party pledged to eliminate poverty by 2030 through welfare programmes. Continue tax reforms to raise the tax-to-GDP ratio from 13pc to 16pc, the PML-N manifesto promised. It further promised that at least 100,000-200,000 jobs would be created during the five years tenure. Expedite completion of long-term CPEC plan.
Earlier, former state minister Marriyum Aurangzeb began by reading out a message from former prime minister and PML-N supreme leader Nawaz Sharif, who regretted the “political conspiracies” his government was allegedly subjected to after coming into power in 2013. The fact that Chinese President Xi Jinping’s trip to Pakistan in connection with CPEC-related investment had to be postponed proved “how harmful dharnas (sit-ins) were for the national interest”.
Sharif also criticised the “unprecedented” court decisions that led to his ouster as prime minister and removal as party head.
It is incumbent upon the PML-N to ensure the progress of democracy, political harmony, protection of rights of minorities, respect for women and supremacy of the Constitution in Pakistan, he said.