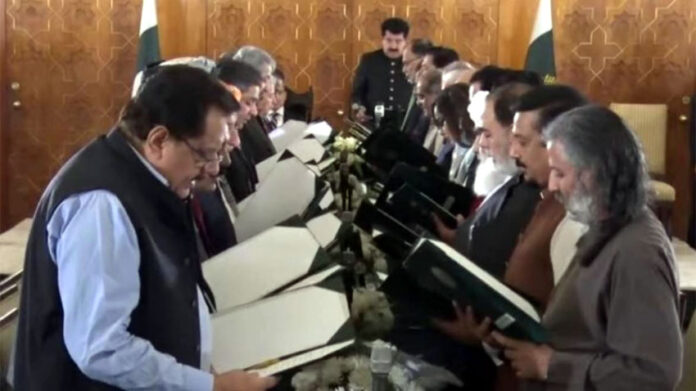 ISLAMABAD: A 34-member federal cabinet took oath at a ceremony in Islamabad on Tuesday.

The ceremony was scheduled to be held on Monday, but President Arif Alvi refused to administer the oath to the MPs, compelling the government to postpone the ceremony to 11:00 am Tuesday.

In the Shehbaz Sharif’s cabinet, under the power-sharing formula, the Pakistan Muslim League-Nawaz (PML-N) got a lion’s share in the cabinet with 14 ministers, the Pakistan Peoples Party (PPP) 11, and the Jamiat Ulema-i-Islam-Fazl (JUI-F), whos chief had demand immediate election in the country, has four ministries.

Meanwhile, the rest of the seven positions will be allotted among smaller parties.

Those who took the oath of office today include 31 federal ministers and three ministers of state.

The ministers of state who took the oath include Aisha Ghaus Pasha, Hina Rabbani Khar and Abdul Rehman Khan Kanju.

Prime Minister Shehbaz Sharif was also present on the occasion.

On Monday, PML-N central spokesperson Marriyum Aurangzeb, while speaking at a press conference, announced that the names of the cabinet would be revealed soon.