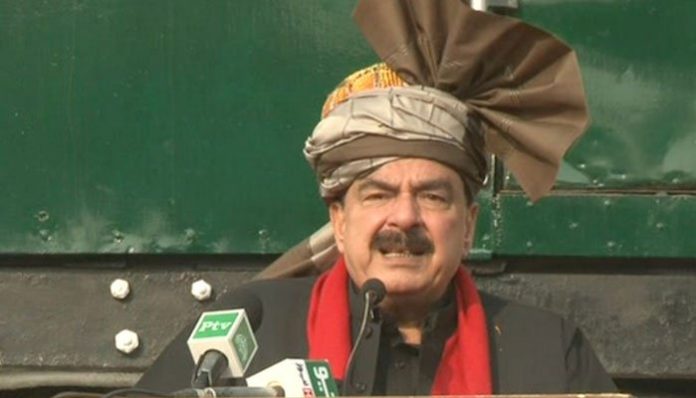 PESHAWAR: Minister for Railways Sheikh Rasheed on Sunday inaugurated the high-speed ‘Rahman Baba Express’ train to facilitate people travelling between Peshawar and Karachi.
The train, with 10 economy-class coaches and a brake van, will run between the cities with a total journey time of 26 hours and fare of Rs1,350.
It will pass through various cities including Nowshera, Attock City, Rawalpindi, Wazirabad, Faisalabad, Toba Tek Singh, Multan, Bahawalpur, Rahim Yar Khan, Rohri, Nawabshah, Hyderabad, Landhi.
Passengers traveling via Rahman Baba Express on the first day (today) will be charged half the ticket.
Addressing media at the inauguration of the latest rail service, Sheikh Rasheed said the Rahman Baba Express is a gift from Prime Minister Imran Khan to the people of Khyber Pakhtunkhwa.
The railways minister said the entire rail track from Karachi to Peshawar would be upgraded, and passengers would soon be able to travel from Karachi to Peshawar in eight hours.
He added that three trains would be launched for safari tourism as well.
“People voted for Imran Khan so that corrupt elements can be put behind bars,” Rasheed said.
He called for encroachments to be cleared from rail tracks, and lamented that the railways had handed out commissions in the past only to end up incurring financial losses.
“When the trains run, the country’s economy would be [revived] as well,” he said.
Pakistan Railways recently launched nine trains including the Sindh Express, Shah Abdul Latif Bhittai Express, Lahore-Faisalabad Non Stop, Mianwali Railcar, Rawalpindi Express, Mohenjodaro Express, Rohi Express and Dhabeji Express.