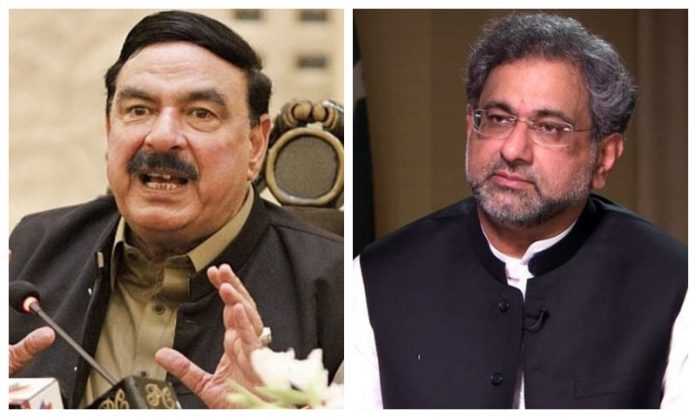 ISLAMABAD: Federal Minister for Railways Sheikh Rashid Ahmad and former prime minister and PML-N stalwart Shahid Khaqan Abbasi have tested positive for COVID-19.
According to a statement by the ministry, Sheikh Rashid is showing no symptoms of the virus. However, he has undergone self-isolation for two weeks, the ministry added.
According to Shahid Khaqan Abbasi’s family sources, the former prime minister was tested yesterday for the virus, the result of which was obtained today. Sources added the PML-N leader is isolating at his residence.
PML-N President Shehbaz Sharif and Punjab government spokesperson Musarrat Cheema prayed for Abbasi’s speedy recovery.
Earlier in the day, PTI MNA Jai Prakash who attended the National Assembly session last week has tested positive for coronavirus on Monday.
According to sources, Prakash had his test done on Friday after which he attended a session of the National Assembly. The MNA reportedly also hosted an event in the evening which was also attended by Foreign Minister Shah Mehmood Qureshi.
A day earlier, PPP MPA Sharjeel Memon announced he had tested positive for coronavirus and had gone into self-isolation.
Memon is the Sindh government’s focal person for coronavirus in Hyderabad and also attended the provincial assembly session a few days ago.
Last week, PML-N Punjab Assembly lawmaker Mian Naveed Ali from Pakpattan had tested positive for coronavirus.