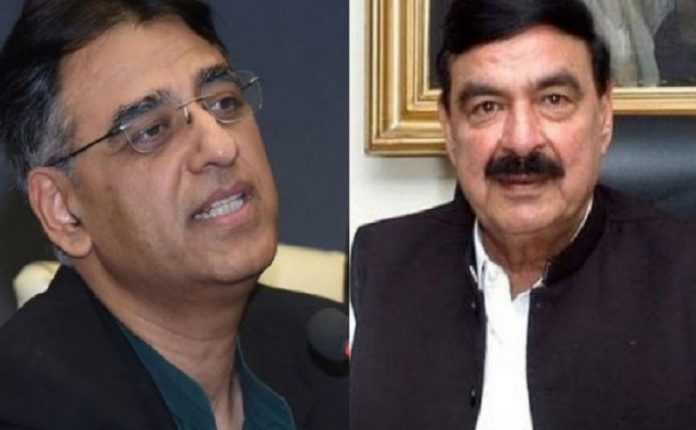 ISLAMABAD: Minister for Railways Sheikh Rashid on Thursday held a meeting with former finance minister Asad Umar in a bid to convince him to return to the federal cabinet.
The meeting took place a week after Umar stepped down as the head of the finance ministry, and opted against taking any position, including the energy ministry which he said the prime minister wanted him to take.
The details of the meeting between the PTI leader and the Awami Muslim League founder were not disclosed.
However, Rashid, who embarked on a four-day official tour of China with Prime Minister Imran Khan today, will reportedly seek another meeting with Umar upon his return to the country.
Umar had resigned from his position as the finance minister last week in the midst of a major cabinet reshuffle. In the aftermath of his resignation, Rashid had told reporters that he will ask the PTI leader to “continue being a part of the cabinet”.
“Umar is a part of the PTI, he represents PTI’s philosophy and has made sacrifices for Imran Khan. I am sure that sooner or later he would come back to serve in some capacity,” he had said.