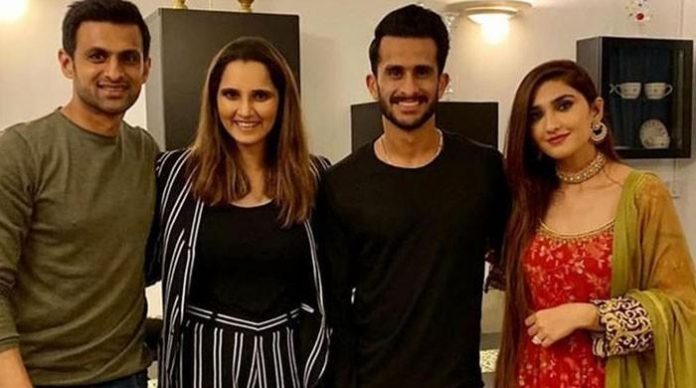 DUBAI: Sports celebrity couple Shoaib Malik and Sania Mirza hosted a dinner for newlywed cricketer Hasan Ali and his Indian wife Samiya Arzoo in Dubai.
Hasan Ali has shared the picture of the occasion on his social media account and thanked for the delicious dinner.
Earlier on August 20, Pakistani fast bowler Hasan Ali tied the nuptial knot with Dubai-based Indian expatriate – Samiya Arzoo – in a private ceremony attended by family and close friends including leg-spinner Shadab Khan at Atlantis, The Palm.
Two separate ballrooms – small in size – were organized for the nikkah ceremony owing to the tight guest list. The rukhsati (bridal departure) has been scheduled to take place after three months.
Samiya Arzoo is an aeronautical engineer and had met the Pakistan cricket star through friends, and the couple’s relationship has been making headlines since last month.
Hasan Ali has become the fourth Pakistan cricketer to get married to an Indian girl after Zaheer Abbas, Mohsin Hasan Khan and Shoaib Malik. Former captain Zaheer Abbas was the first Pakistani player to marry an Indian woman.