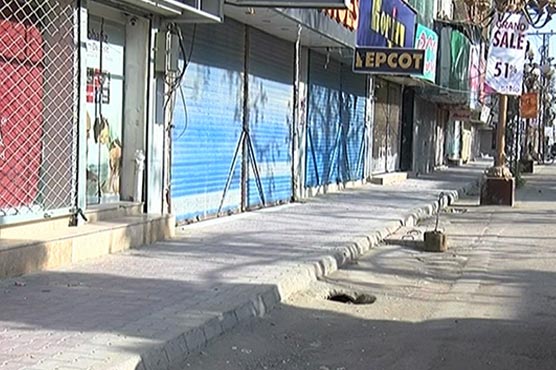 QUETTA: On the call of Jamiat Ulema-e-Islam Fazal (JUI-F) chief Maulana Fazalur Rehman, the people in Balochistan on Sunday observed shutter down strike against the death of Maulana Muhammad Hanif in Chaman blast.
According to details, all the business sectors and public transport in the province remained closed.
Earlier on Saturday, at least three persons including Deputy General Secretary of JUI-F Maulana Muhammad Haneef were killed and 20 others sustained injuries in a blast that occurred near Chaman area of Qila Saif Ullah, Balochistan.
The blast took place on Taj Road that shattered windows of nearby buildings. Police and security personnel arrived at the scene and launched investigation into the matter.
Police said the blast took place in front of the JUI-F leader’s office.
JUI-F Chief Maulana Fazl-ur-Rehman condemned the blast, saying that he was deeply aggrieved due to the death of his party’s leader.
“Maulana Mohammad Haneef was a sincere leader,” said Fazl-ur-Rehman, calling the incident a conspiracy against peace.