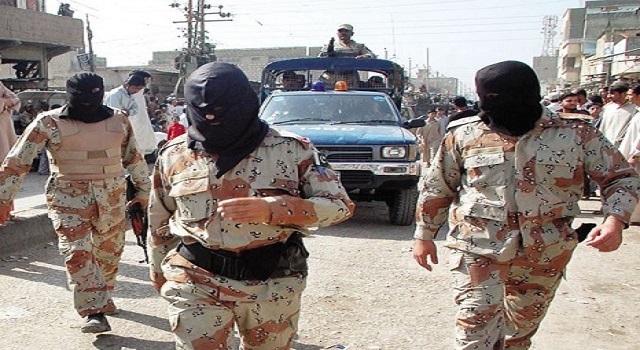 KARACHI: The Sindh government has approved an extension in the special powers of the Pakistan Rangers for 90 days in Karachi.
Sindh Chief Minister Syed Murad Ali Shah signed a summary in this regard on Wednesday.
The approved summary will now be forwarded to the federal government for approval.
The Rangers ‘operation’ against criminal elements in Pakistan’s commercial hub was initiated back in September 2013 when the federal cabinet empowered the paramilitary force to lead a targeted advance against criminals already identified by federal military and civilian agencies for their alleged involvement in targeted killings, kidnappings for ransom, extortion and terrorism in Karachi.
A report issued by the paramilitary force at the end of 2016 stated that the Rangers had conducted 1,992 operations across the city over the year through which more than 2,847 suspected criminals were taken into custody.
A break-up of the numbers shows that of the 446 target killers arrested by the Rangers, 348 belonged to various political groups, 87 had links to Lyari gangs, while 11 were affiliated with different sectarian groups.
The report said 26 criminals involved in kidnapping for ransom were also apprehended, and 13 of their abductees were safely brought back.
In the report, the Rangers also claimed that murders and targeted killings in the city hit an all-time low in the year, with 87 people falling victim compared to 199 in the preceding year.