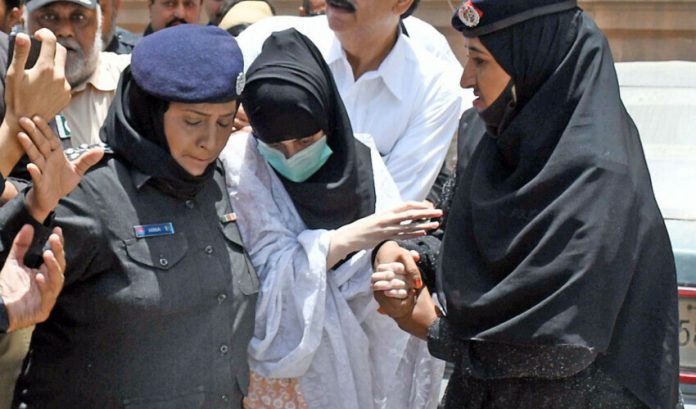 KARACHI— The Sindh High Court has announced the verdict on Wednesday in Dua Zehra case allowing her to decide where she wants to go with her parents or husband.

The court which was hearing the application filed by Dua’s father, Syed Mehdi Ali Kazmi, said that “petition has served its purpose as it was only to the extent of the whereabouts of the alleged minor / abductee Dua E Zehra Kazmi who has already been produced on the last date of hearing and has stated before us on oath that she was neither abducted nor kidnapped.

In a three-page written order, Justice Junaid Ghaffar said the court reached the verdict in line with the testimonies. “In light of all the evidence, this is not a case of kidnapping.” The alleged/minor Dua E Zehra Kazmi, pursuant to her statement on Oath and Age Certificate is set at liberty to decide as to whom she intends to reside and go along,” the order read.

Dua, Karachi teenager who went missing from home in Shah Faisal Colony’s Golden Town in April, was recovered from Bahwalnagar on Sunday along with Zaheer Ahmed – the young man who she claimed to have married of free will.

When Dua Zehra was brought in the court for the hearing, her mother fainted after seeing her. Police allowed them to meet briefly. As soon as the mother tried to hug her, Dua pushed her away and refused to meet her. After this, the police personnel deputed on court duty separated them.

Advocate general presented Dua’s medical report. The report said that the girl is probably between 16 and 17 years of age, a minor, and not old enough to acquire a computerized national identity card of her own.

Lawyer representing Dua’s father Syed Mehdi Ali Kazmi objected to the report. He argued that the documents that they have shows that the girl is 14 years old. We are not ready to accept the medical report declaring Dua to be 17, the lawyer said.

Prosecutor general said that the case for the recovery of Dua Zehra should be wrapped up since the objective has been achieved. The case will now go to the trial court, he added.

Justice Junaid Ghaffar observed that there are precedents of the Supreme Court and Federal Shariah Court’s decisions that if a girl has reached the age of puberty, then she can marry of her own will.

We are bound to follow the law and will take decision according to the law.

The case
Dua had gone missing from Shah Faisal Colony’s Golden Town area in April. Her disappearance made headlines after Dua’s father, Syed Mehdi Ali Kazmi, posted a video on social media, urging people to look for his daughter.

However, Dua has maintained in multiple videos that she had left her parents’ home of her own volition to marry Zaheer and insisted that she was of legal age for marriage, contrary to the age being claimed by her parents.

The police, later, traced her to Pakpattan in Punjab and shortly after being traced she released a video statement urging her family and the authorities not to harass her as she had contracted the marriage of free will.

Zehra also said that she was of the legal age to make decisions on marriage independently.

The police produced Zehra and her ‘husband’ Zaheer Ahmed before a Lahore court, which allowed the girl to go with Zaheer after she said she was 18 and not 14.

At the time, officials told SAMAA TV that officers sought custody of the teenager to bring her back to Karachi for further investigations, including a bone test to determine the actual age of the girl.

However, Zehra told the judicial magistrate that she was 18 and had married Zaheer of her free will adding that neither anyone had kidnapped her nor did she want to go to Darul Aman.

She spoke as Zaheer was removed from the courtroom.

Police officials later told reporters that they had ‘released’ Zehra and her ’husband.

Punjab police along with an investigator from the AVCC of the Sindh Police from Karachi had been working on her case.

Her family, meanwhile, maintained that their daughter was barely 14-years-old and thus under the legal age for marriage and that she had been coerced into marriage by an older man.