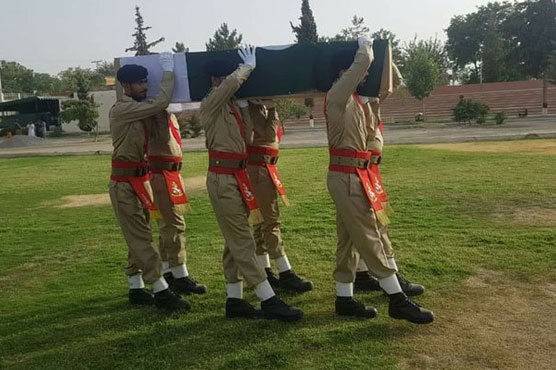 QUETTA: The funeral prayer of Nawabzada Siraj Raisani, younger brother of former Balochistan chief minister Aslam Raisai, who was martyred in yesterday’s suicide blast which left 131 people dead and dozens others wounded has been offered in the provincial capital’s Moosa Stadium.
Chief of Army Stadium General Qamar Javed Bajwa, Commander Southern Command Lt Gen Asim Bajwa, high-ranking Army officials, Balochistan Caretaker Chief Minister Allauddin Mari, provincial ministers, Nawab Aslam Raisani and Nawabzada Lashkari Raisani were among hundreds of people who attended the funeral prayer of Nawabzada Siraj Raisani..
Later he was buried at his ancestral village Kanak in Mastung district.
Mastung Sadr police have also registered a case of the suicide blast on the complaint of naib tehsildar. The case has been registered against unknown people under the ATA.
Earlier, in Balochistan the funeral prayers of 128 martyrs were offered in their ancestral areas of Mustung district. Later they were buried in their ancestral graveyards.
On Friday, a suicide blast ripped through a crowd at a political rally in Mastung on Friday, killing 131 including younger brother of former Balochistan chief minister Aslam Raisani and Balochistan Awami Party (BAP) candidate, Nawabzada Siraj Raisani.
Meanwhile, the caretaker government had announced to observe one-day official mourning tomorrow (Sunday) throughout the country in view of recent terrorist attacks in Khyber Pakhtunkhwa and Balochistan.
The announcement to this effect was made by Prime Minister Nasirul Mulk in Islamabad today with the aim to also express grief and solidarity with the victim families. The prime minister office has also directed the interior ministry to formally issue a notification in this regard.
Balochistan government has also announced two-day mourning in the province over the tragic suicide bomb blast in Mastung on Friday, in which one hundred twenty-eight people were martyred and around two hundred others injured.