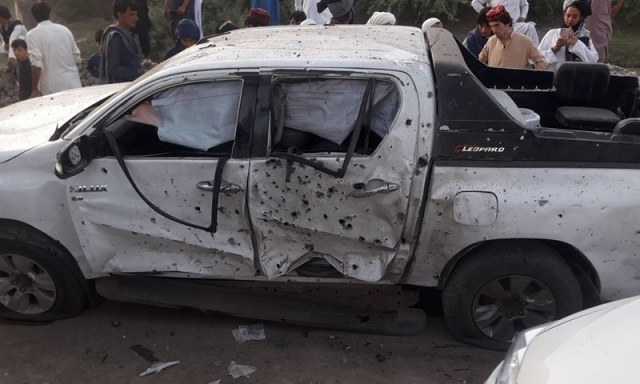 QUETTA: The death toll in the Mastung blast targeting Balochistan Awami Party (BAP) candidate Nawabzada Siraj Raisani’s convoy has reached to 70, whereas, more than 120 others sustained injuries, deputy commissioner Mastung said.
Nawabzada Siraj Raisani is among the 70 people killed in the blast when his convoy was targeted in Daringarh area of Mastung district of Balochistan here on Friday. The injured have been shifted to District Headquarters (DHQ) Hospital Mastung and Quetta Civil Hospital for medical treatment. The critically injured were further shifted to CMH Quetta.

According to initial reports, Siraj’s convoy came under attack shortly after he attended a corner meeting for provincial assembly seat PB-35. Siraj is the brother of former Balochistan chief minister Mohmmad Aslam Khan Raisani. Election Commission of Pakistan has suspended elections on PB-35 constituency.
This is the third terrorist attack on a candidate ahead of general polls. Earlier in the day, four people were killed and 39 injured in an attack on the convoy of former Khyber Pakhtunkhwa chief minister and Jamiat-Ulema-Islam (F) leader Akram Khan Durrani in Bannu.
The former minister was leaving a corner meeting when an improvised explosive device (IED) planted in a motorcycle some 50 metres away from the jalsa ground went off in the jurisdiction of Havaid police station, RPO Karim Khan said.
The attack comes days after Awami National Party (ANP) leader Haroon Bilour was assassinated in a suicide attack at a corner meeting that killed 19 others and injured over 60 people on June 10.
The attacker detonated his explosive belt close to the ANP leader’s vehicle as he approached a rally organised to promote his election in the Yakatoot area of the provincial capital late Tuesday night. Rescue teams and security officials shifted the deceased and injured to the Lady Reading Hospital (LRH) soon after the attack.