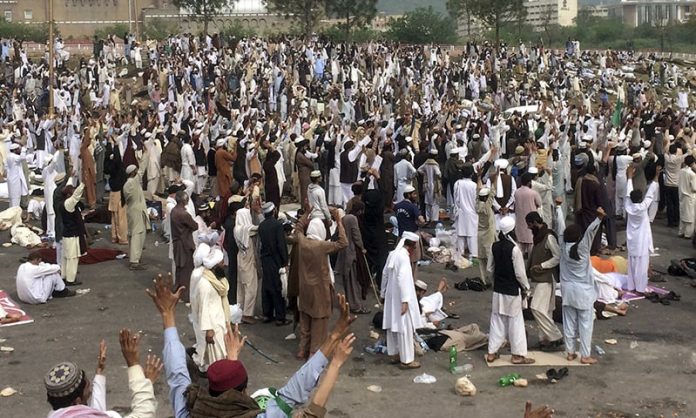 ISLAMABAD: Minister of State for Capital Administration and Development Dr Tariq Fazal Chaudhry said on Wednesday that government wanted to peacefully end Islamabad sit-in.
Talking to media here, the minister said that the government had nominated a team under Pakistan Muslim League-Nawaz (PML-N) leader Raja Zafar ul Haq to negotiate with the sit-in protestors.
He further said; commuters, students, patients and office workers in the twin cities continued to face hardship as protesters continue to block the Faizabad Interchange.
He said that religious leaders have shown their confidence on the nominated team as Mushahid Ullah and Ahsan Iqbal are the part of committee.
Meanwhile, as the sit-in enters the tenth day, commuters in the twin cities continued to face hardship as protesters continue to block the Faizabad Interchange.
Islamabad Police have issued an alternative traffic plan for the commuters traveling on the Islamabad-Rawalpindi route but the sit-in has effectively chocked the roads connecting the twin cities.
As a result of the continued sit-in, the Metro Bus Services between the two cities has also been partially suspended due to security reasons, which has caused further problems for commuters, of whom around 120,000 people use the service daily.
Most affected by the ongoing sit-in are students of various schools and colleges, for whom commutes to their educational institutes now take hours instead of minutes.
Commuters in the twin cities have had to search for alternate routes to reach their destinations and often have had to bear hours-long traffic jams.
The protesters, activists, and supporters of religious parties want the government to punish those responsible for changing the wording of the oath regarding the finality of Prophethood taken by lawmakers.
The government had immediately fixed the ‘clerical error’ by passing another amendment.