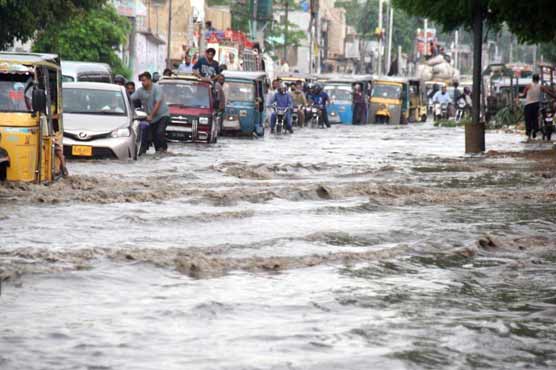 KARACHI: At least six people were killed and several others injured due to rain in the metropolis as torrential rains wreaked havoc, bringing with it hours-long power outages in multiple neighbourhoods despite claims by the K-Electric that it had made improvements in its system ahead of the thunderstorm.
A woman and children were among those killed during the rain in the city, rescue officials confirmed. Two of those died as the roof of a house in Ibrahim Hyderi collapsed, while a three-year-old girl died when a wall fell in Malir’s Shamsi Society, officials said. Another woman was electrocuted to death in Liaquatabad, while a child died the same way in Mominabad, Orangi Town.
Several others were injured when a pole-mounted transformer (PMT) fell in Ibrahim Hyderi, a spokesperson for the Pakistan Fisherfolk Forum (PFF) said. One person was injured when a tree fell in Korangi’s Sector 33-D, while a five-year-old was wounded when a wall collapsed in Malir’s Memon Goth.
The monsoon system was said to have been in Karachi’s southeast since the morning and had strengthened due to humidity from the sea, leading to the first rain in Pakistan’s financial capital. Earlier Monday, the Pakistan Meteorological Department (PMD) director had noted that thunder cells were observed near Karachi and the rain spell was “strong”.
“Some areas in Karachi are experiencing rain with thunder,” he had said, adding that strong winds and dark clouds were set over Mai Kolachi and Malir and Shahrah-e-Faisal were experiencing heavy rain. The PMD’s top official said wind speeds in the thunderstorm were recorded at 54 kilometres per hour.
According to data provided by the authority, the highest rainfall was recorded in Saddar, at 43 millimetres (mm), while 26 mm was registered at Pakistan Air Force (PAF) Faisal Base, 22mm in Nazimabad, 12mm at PAF Masroor Base, 8.8mm at Karachi’s Jinnah International Airport, 3.1mm in Landhi, and 1.2mm in Surjani Town.
As the torrential rain accompanied by a thunderstorm started late afternoon in Karachi, two trees were reported to have been downed near Drigh Road on Shahrah-e-Faisal and the Arts Council of Pakistan, leading to traffic blockage. Despite the PMD’s early forecast, there seemed to be no plan to manage the traffic disruption from related authorities. Limited visibility due to heavy rain disrupted traffic flow at Shahrah-e-Faisal, while rainwater stagnated near the Quaidabad Bridge. A major traffic jam was seen at the President House Road, I.I. Chundrigar Road, and near Governor’s House. People returning to their homes were stranded in traffic.
The metropolis’ sole power supplying company, the K-Electric, said Monday it already took significant steps to improve its distribution network ahead of the predicted torrential rains in the city.
In an update, a spokesperson for the K-Electric said protecting human lives was “a top priority” for the company. People should stay away from utility poles and broken wires in the rainy season, he advised.
Among the “commendable” steps it took to improve its system were geo-tagging of high- and low-tension (HT and LT) poles, earthing, and grounding.
“The K-Electric continuously remained active against the kunda [illegal electricity connections] mafia, as well as illegal Internet and TV cables on its poles,” the spokesperson added.
The company also took steps against illegal street lights and dangerous switches installed on its utility poles, the official said, adding that the aim behind these measures was to improve the system ahead of the rains in Karachi.
“The protection of human lives has been our top priority,” the K-E representative noted. “We hope that the city government and related institutions will drain rainwater immediately.
“The K-Electric’s mobile teams are always busy in timely assistance for power-related issues,” the spokesperson said, adding that in case of any complaint before or during the rains, people may immediately reach out to its contact centre at 118 or social media platform.