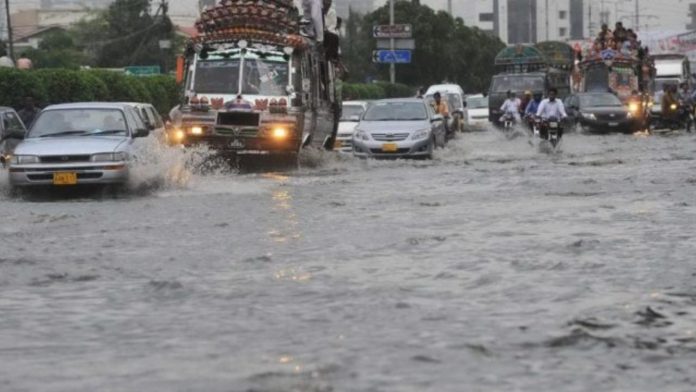 KARACHI: At least six people were electrocuted while various areas of Karachi were hit with power outages as heavy rain continued to lash parts of the metropolis and Sindh on Sunday. The uninterrupted torrential downpour which started on Saturday morning has created a critical situation in Karachi.

The MET office further said they have recorded 110.7mm rain in the last 24 hours. The intermittent spell would continue for the next 36 to 42 hours, the MET office had said in its weather advisory on Saturday.Vehicles passing through the stagnant water accumulated at KPT Interchange after heavy rain in the city. Photo: APP
The metropolis’s low-lying areas such as Landhi, Ilyas Goth, Ibrahim Haideri, Majid Colony UC 4, Shah Faisal, Malir, Scheme 33, Rehri Goth and Korangi, which were prone to urban flooding, were again inundated with reports of water accumulating around power installations and entering homes.

Ilyas Goth, Ibrahim Haideri, Majid Colony UC 4 were also among the areas that experienced torrential rain and urban flooding.K-electric in a series of tweets said they had temporarily suspended power to those areas which are in a state of urban flooding in the interest of public safety.

“Restoration efforts are also severely hampered because of the challenging conditions caused by the relentless rain and water-logging which is now posing a serious threat to electrical installations,” KE said.

In Hyderabad, Matiari, Hala, Tando Muhammad Khan, Mirpurkhas, low lying areas experienced urban flooding along with power outages. Commissioner Hyderabad said power supplier Hyderabad Electric Supply Company (HESCO) has yet to restore power to the city, despite no rain. “Due to the power outage, 120 pumping stations have stopped working and we have not been able to drain the water,” he added.