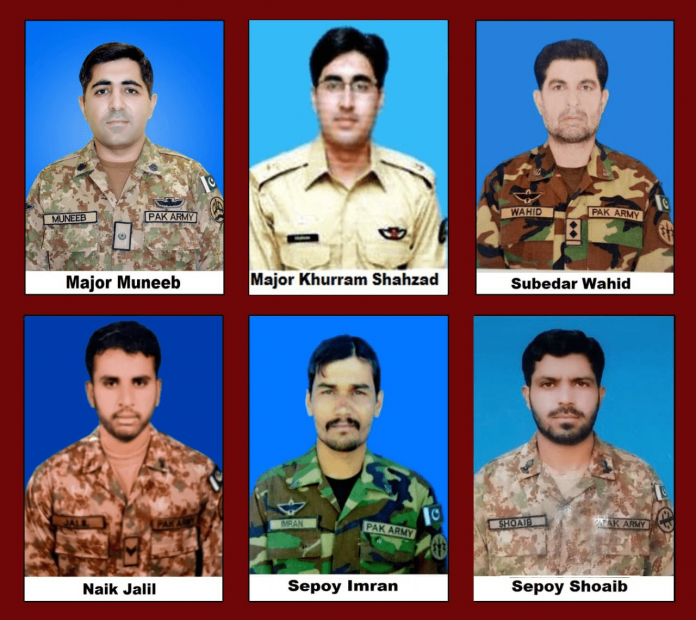 Six soldiers, including officers, have been martyred in a Pakistan Army helicopter crash in Baluchistan’s Harnai district, the military said on Monday.

Both pilots, a JCO, two NCOs and a sepoys are among the martyrs.

The Inter-Services Public Relations, the media wing of military, said that Pakistan Army Aviation helicopter was on a flying mission when it crashed near Harnai.

The ISPR released the followed details on the martyrs.

Major Khurram Shahzad was 39-year-old and a resident of Attock. He was married and had one daughter.

Major Muhammad Muneeb Afzal was aged 30, a resident of Rawalpindi. He was married with two sons.

Subedar Abdul Wahid was aged 44. He was a resident of village Sabir Abad, Karak. He was married with 4 children including 3 sons and a daughter.

Sepoy Muhammad Imran was 27-year-old and a resident of Makhdoompur, Khanewal . He was married and had two daughters and a son.

Naik Jail, a crew member, was 30 year old an a resident of village Bhutta, Lohara, Teh Kharian in district Gujrat. He was married with two sons.

Sepoy Shoaib was 35 and a resident of village Khatarphatti in Jhand tehsil of district Attock. He was married with one Son.

The helicopter crashed on the night between Sunday and Monday. There was no word on the cause.