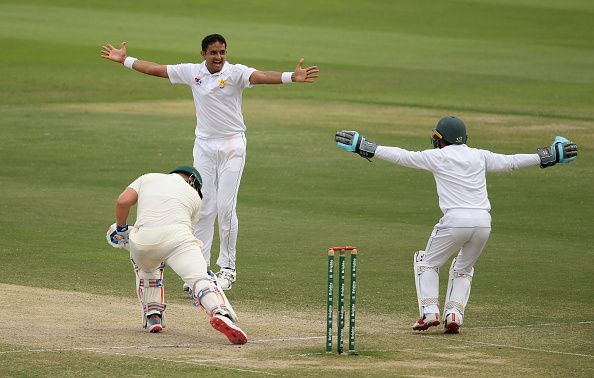 CAPE TOWN: South Africa were leading at lunch, as Pakistan continued to hunt for wickets on the second day of the second Test at Newlands on Friday.
At the end of the first session, the Proteas were 188-4, in reply to Pakistan’s 177 all out.
Pacer Mohammad Abbas removed Hashim Amla to give Pakistan their first breakthrough earlier today. Abbas bowled out Amla for 24, after South Africa resumed on 123-2 a day after skittling Pakistan for 177.
Shaheen Shah Afridi dismissed de Bruyn for 13 to give Pakistan some hope of a rebound after their meagre first innings score.
Opener Aiden Markram made a return to form as he scored 78 to help South Africa into a strong position on the opening day of the Test.
South Africa, who won the first of the three-Test series by six wickets in Pretoria last week, will be confident of building a substantial first-innings lead after their four-man seam attack ripped through the Pakistan batting line-up.
Markram, who struggled on tour in Sri Lanka in July and in the Boxing Day Test against Pakistan, was bowled on the last ball of the day by Shan Masood.
Earlier, Duanne Olivier added to his 11 wickets in the first Test with four more as Du Plessis’ decision to put Pakistan into bat and go with a seam-only attack on a quick wicket, was vindicated.
Pakistan were teetering at 75-5 at lunch and lost five more wickets before tea despite 56 from captain Sarfraz Ahmed, who went out to an injudicious uppercut shot just when a fightback looked on the cards.
Masood made 44 with Olivier’s figures of 4-48 bookended by Dale Steyn, who took the first wicket of the day and the last two of the Pakistan innings for 3-48.