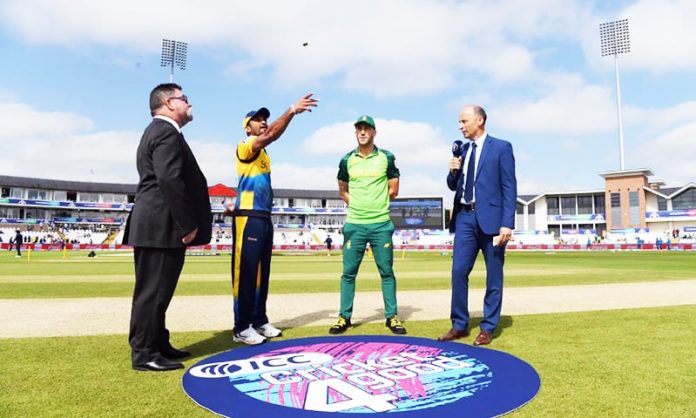 DURHAM: South Africa skipper Faf du Plessis won the toss and sent Sri Lanka in to bat in the World Cup group game at Durham.
Sri Lanka is still in contention for a playoff spot after its upset win over England. Nuwan Pradeep has been sidelined with an illness and has been replaced by paceman Suranga Lakmal in the only change to the Sri Lanka lineup that beat England last Friday.
South Africa is out of contention with just one win from its opening seven games and made two changes to its lineup, with veteran JP Duminy coming in for David Miller and Dwaine Pretorius starting in place of fast bowler Lungi Ngidi.
A win would move Sri Lanka to eight points, equal with England, with games remaining against West Indies and India.
Sri Lanka is aiming to follow its upset win over top-ranked England with a victory over South Africa in Durham on Friday to maintain its chance of reaching the World Cup semifinals.
Sri Lanka’s win over England was the start of a sequence of results that removed some predictability in the playoff combination and put pressure on the tournament hosts.
In head-to-head contests, the Sri Lankans have lost 16 of their last 18 one-day internationals against South Africa, including the last five, but are growing in confidence on the back of performances from veterans Lasith Malinga and Angelo Mathews.
The weather forecast for Durham is for a cloudy start, clearing to sunny in the afternoon.
Teams:
Sri Lanka: Dimuth Karunaratne, Kusal Perera, Avishka Fernando, Kusal Mendis, Angelo Mathews, Dhananjaya de Silva, Jeevan Mendis, Thisara Perera, Isuru Udana, Suranga Lakmal, Lasith Malinga.
South Africa: Hashim Amla, Quinton de Kock, Faf du Plessis, Rassie van der Dussen, Aiden Markram, JP Duminy, Dwaine Pretorius, Andile Phehlukwayo, Chris Morris, Kagiso Rabada, Imran Tahir.