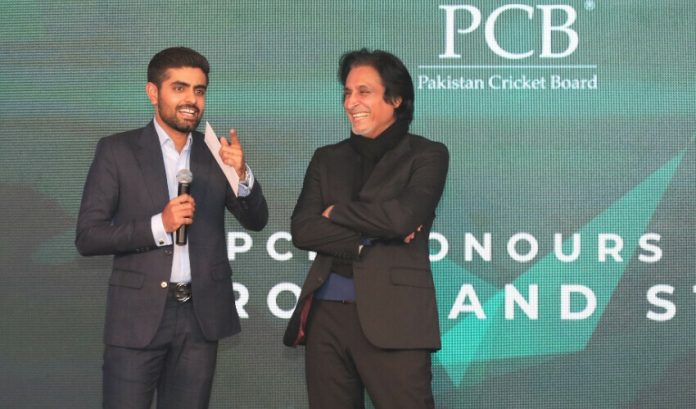 LAHORE— The Pakistan Cricket Board (PCB) Chairman Ramiz Raja has met the national side’s all-format skipper Babar Azam in order to discuss the squad for Sri Lanka tour, which will take place next month.

Schedule has already been announced for the upcoming two-match Test series between Pakistan and Sri Lanka.

Raja and Azam discussed some of the names, including opener Shan Masood and leg-spinner Yasir Shah, in the list prepared by Chief Selector Mohammad Wasim for the Sri Lanka Test series.

The squad for Pakistan’s red-ball tour of Sri Lanka will be announced soon.

Raja also expressed his satisfaction over the team’s performance in the recently-concluded ODI series against West Indies, which Pakistan whitewashed, on home soil. He also urged the Pakistan captain to continue playing “positive and aggressive” cricket.

Raja also announced rewards of Rs.1 million each for the Pakistan blind and deaf cricket teams due to their impressive performance at the international level.

As per the schedule, the first Test will begin on July 16 in Galle, meanwhile Colombo will host the second Test from July 24.

Pakistan will also play a three-day warm-up match in Colombo between July 11 and 13.

The series will be played under the ICC Men’s World Test Championship Cycle of 2021 – 2023.

Pakistan team, which last toured Sri Lanka in 2015, will arrive on July 6.