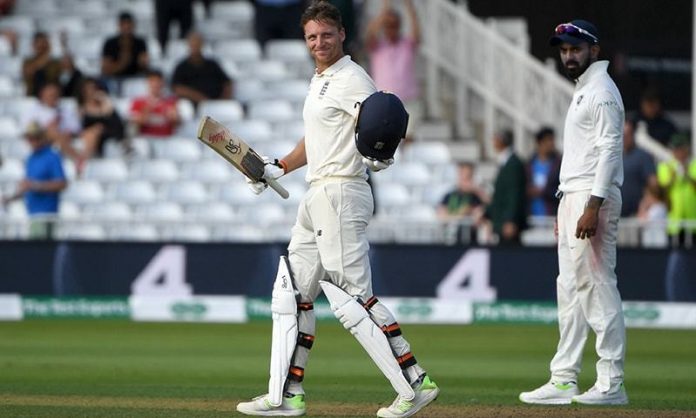 Ben Stokes and Jos Buttler were staging an unlikely bid to stave off defeat for England in the third test after extending their unbeaten fifth-wicket stand to 111 runs against India by tea on the fourth day at Trent Bridge.

Chasing a world-record 521 to win the test and clinch the series, England slumped from 27-0 to 62-4 before lunch but Stokes (42) and Buttler (67) were leading the recovery with the kind of disciplined batting the top order failed to produce.

England reached tea at 173-4, needing another 348 runs for victory.

England wicket-keeper Jonny Bairstow was padded up and appeared ready to bat, even though he broke a bone in the middle finger of his left hand on Monday.

After England resumed on 23-0, India paceman Ishant Sharma removed Keaton Jennings (13) with the fifth ball of the day and fellow opener Alastair Cook (17) in his next over, both to catches behind the wicket.

Stokes and Buttler scored 89 runs in the second session, showing patience despite being naturally aggressive batsmen. Buttler has still hit 13 fours in his 115-ball innings, while the usually attacking Stokes back in the team after being found not guilty by a jury this week of affray in a late-night incident had a strike rate of 37.83.

Sharma had team-best bowling figures of 2-43.