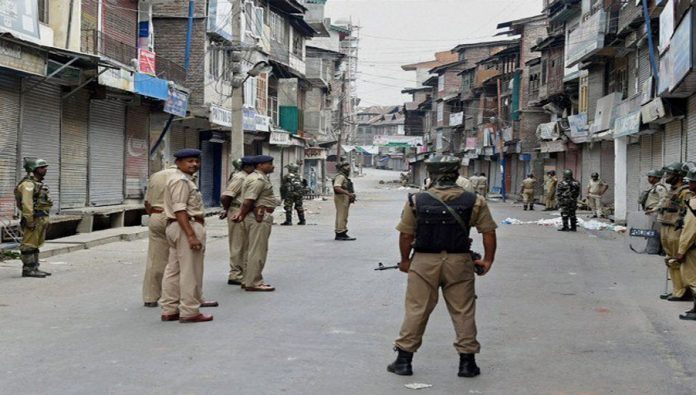 SRINAGAR: In occupied Kashmir, the authorities continue to impose stringent curfew and other restrictions across the entire region on the 21th consecutive day on Sunday for silencing the people from holding demonstrations against Modi-led Hindu nationalist Indian government for abrogating special status of Jammu and Kashmir.
According to Kashmir Media Service, due to severe blockade, people have been facing acute shortage of essential commodities including baby food and life-saving medicines and the valley represents a humanitarian crisis. Hundreds of thousands of people are besieged and Jammu and Kashmir has become a big jail for its inhabitants.
Over 10,000 Kashmiris including hundreds of political leaders and workers have been detained. The jails and police stations have run out of space and many detainees have been lodged in makeshift detention centres. A hotel in Srinagar being used as a makeshift detention centre has been declared a sub-jail. Around 50 pro-India political leaders are detained in the hotel.
On the other hand, the people of occupied Kashmir have been warned to beware of Indian collaborators who are trying to approach their Indian masters to bring the members of extremist Hindu organisations like Rashtriya Swayamsevak Sangh (RSS) and other Hindutva forces to the territory to enslave Kashmiris and change their demography.
The warning has been issued through posters and handbills by Hurriyat activists. The Indian collaborators have been asked to adopt Hurriyat line and in case they provide any facilitation to Hindutva forces, they would face serious consequences.
Yesterday, Indian opposition leaders including former Congress president Rahul Gandhi were barred from leaving the airport on Saturday in Kashmir, where local authorities had warned that their visit could stoke heightened tension in the region.
The delegation of opposition leaders from parties including Congress, the Communist Party and the All India Trinamool Congress said they wanted to assess the situation in the valley, and flew from New Delhi on Saturday.
“If the situation is normal then why is the government restricting us from entering the valley. On the one hand the government says that things are normal and on the other they impose entry restrictions, why so many contradictions?” senior Congress leader Ghulam Nabi Azad told reporters before departing.
When their plane arrived in Srinagar, the politicians were not allowed to leave the airport and were sent back within a few hours.
Each of the dozen or so entrances have been blocked with makeshift barricades of bricks, corrugated metal sheets, wooden slabs and felled tree trunks. Groups of youths armed with stones congregate behind the biggest obstacles. The aim: to keep Indian security forces, and particularly the paramilitary police, out of the area.
Soura, home to about 15,000 people, has become the epicenter of resistance to Indian government plans to remove the partial autonomy that was enjoyed by Jammu and Kashmir, the country’s only Muslim-majority state. The enclave, which has effectively become a no-go zone for the Indian security forces, is now a barometer of the ability of Prime Minister Narendra Modi’s Hindu-nationalist government to impose its will in Kashmir after its dramatic move on Aug. 5 to tighten its control over the region.
In several places, Kashmiris have defied stringent curfew and other restrictions and took to the streets in Srinagar to protest against the Indian occupation and atrocities.
Since August 4, the Modi-led Hindu nationalist government has been seeking to tighten its grip on the region.
Indian paramilitary personnel have been raiding on the houses, harassing women and detaining people to spread fear for silencing protests for independence.
Small groups of armed soldiers, many kitted out in full riot gear, were positioned every few metres in the old quarter, and all stores other than a handful of pharmacies were closed.