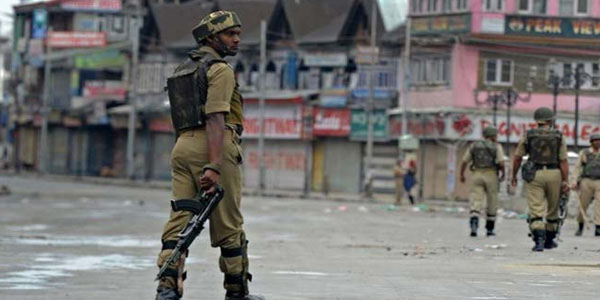 SRINAGAR: Shops and businesses closed Sunday in India-held Kashmir (IHK) after suspected separatists fighting against Indian rule called for a strike a day after soldiers shot and killed two young men in the disputed region.
Armed police and paramilitary soldiers in riot gear fanned out across the region and patrolled streets in anticipation of anti-India protests and clashes.
Authorities also issued a curfew in the old parts of Kashmir’s main city of Srinagar, the urban centre of protests and clashes against Indian rule.
Two students were killed and nine other people were wounded Saturday after soldiers in southern Shopian area opened fire at stone-throwing protesters.
The Indian army claimed its soldiers had fired in “self-defence” as crowd tried to “lynch” an officer and damaged at least four vehicles.
Ahead of Sunday’s strike authorities cut off internet services to mobile phones in southern parts of the region and reduced internet speeds in other parts of the Kashmir valley.
It’s a common practice the government deploys in a bid to calm tensions and prevent anti-India demonstrations from being organised.
Locals say Saturday’s incident began when soldiers came into a village and started removing banners honouring recently killed suspected separatists. Villagers say they resisted the move, threw stones at the soldiers and chanted anti-India slogans, leading to the soldiers opening fire.
The government has ordered a magisterial probe into the incident and police registered a murder case against the soldiers.
Tension in the area was already running high after government forces killed two local ‘separatists’ and a teenage boy during a gun battle Wednesday.
One of the slain ‘separatists’ was from the village where Saturday’s shooting took place.
Pakistan on Sunday strongly condemned the brutal and indiscriminate use of force by Indian soldiers in Shopian on Jan 27.
According to a statement issued by Foreign Office, “the firing resulted in the martyrdom of three innocent civilians and injuries for several others.”
“Countering peaceful, unarmed protesters with lethal weapons and direct bullets is another manifestation of the state terrorism, being perpetrated by India against Kashmiris on a daily basis,” the FO said, adding, “It is clear that the Kashmiri youth is being systematically targeted in order to break the will of the people. But these cowardly tactics will not succeed.”
“Pakistan expresses its complete solidarity with the people of Jammu and Kashmir. We urge the international community to take cognisance of the gross and systematic violations of human rights taking place in Indian Occupied Kashmir, and use its influence with India to bring an end to the shameful culture of impunity that has been fostered there for several decades,” the handout read.
The world community must also play its rightful role in facilitating a just and lasting solution to the Kashmir dispute in accordance with United Nations Security Council Resolutions and the wishes of the Kashmiri people, the FO said. …APP