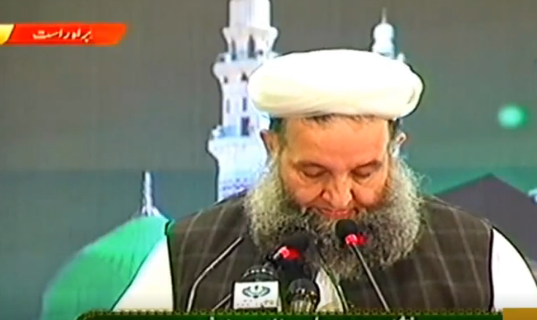 ISLAMABAD: International Rehmatul-lil-Alameen (SAWW) Conference in connection with Eid Milad-ul-Nabi is underway in Islamabad.
It is being held under the auspices of Ministry of Religious Affairs and Inter-Faith Harmony.
The theme of this year’s conference is ‘State of Madina and concept of modern Islamic Welfare State – in light of teachings of the prophet (PBUH).’
The opening session of the conference is being chaired by Prime Minister Imran Khan.
The event is being attended by religious personalities, Ulemas, Mashaikh and scholars besides people from various walks of life. A large number of scholars from various Islamic countries are also in attendance.
Minister for Religious Affairs and Interfaith Harmony Noor ul Haq Qadri says the Holy Prophet (PBUH) brought justice, knowledge and enlightenment in the society that was trapped in darkness, ignorance and injustice.
Addressing International Rehmatul-lil-Alameen (SAWW) Conference in Islamabad today, he said Allah took oath from all prophets regarding belief on Prophet Muhammad (PBUH), who will be final in the chain of Prophethood. All the prophets mentioned the promised prophet (PBUH) in their times.
He said Allah will grant high level to those who mention the name of prophet Muhammad (PBUH) with reverence.
The Minister said Prime Minister Imran Khan has a vision to transform Pakistan into a social welfare state on the pattern of state of Madina. He said the way Prime Minister raised voice at the United Nations and other world forums for respect and dignity of prophet Muhammad (PBUH) is unprecedented.
He said the research papers and articles to be presented in today’s conference will become the foundation of the setting up of a modern Islamic welfare state of Pakistan.