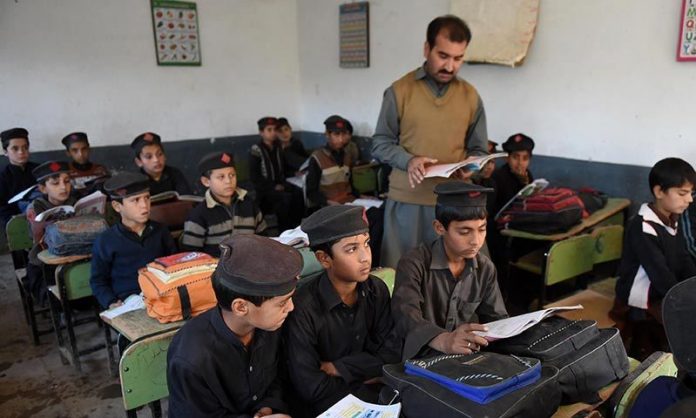 PESHAWAR: The Khyber Pakhtunkhwa Department of Elementary and Secondary Education has released its reports on Government Schools and revealed that the enrolment in private schools in the province has increased by 460,000, as opposed an increase of 218,000 students in government schools.
The report, titled ‘Annual Statistical Report of Government Schools 2017-2018’, revealed that the population of students in private schools increased from 1,609,000 to 2,069,716 in a span of four years.
There was a 4% increase in percentage population studying in private schools from 27% in 2013-14 to 31% in 2018-19.
On the other hand, the overall percentage of students’ enroled in government schools in the province fell from 69% to 65%. A mere 4% of children were studying in religious seminaries.
Moreover, the report revealed that a total of 6,694,238 students were enroled in schools across the province of which 61% were boys and 39% girls.
Interestingly, the highest percentages of girls were enroled in government schools at 44%, while only 16% of girls were enroled in seminaries as opposed to 84% boys.
The statistics are in contradiction to the claims made by Pakistan Tehreek-e-Insaf Chairperson Imran Khan, who was time and again reiterated that a large number of students in the province have transferred from private to public schools.