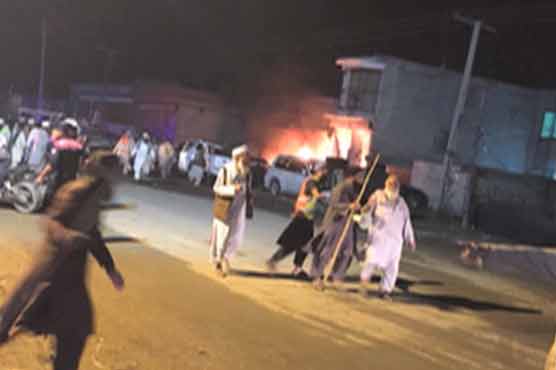 LAHORE: A suicide bomb blast claimed by the Taliban ripped through a police checkpoint on the outskirts of Lahore on Wednesday night, killing seven people and wounding 18, officials said.
Jam Sajjad Hussain, spokesman of a state-run rescue service, told Reuters that his officials had taken seven dead bodies to hospitals.
“Our rescuers are at work,” he said. “They have shifted so far seven bodies.”
Deputy Inspector General of police Haider Ashraf said the bomb exploded when the police were changing guards at the checkpoint just outside an annual religious congregation in Raiwind, where nearly 80,000 people were in attendance.
“A suicide bomber riding a motorcycle attacked the police,” Ashraf said. He said four of the dead were police.
A Taliban spokesman Mohammad Khurasani claimed responsibility for the suicide attack in a WhatsApp message sent to a Reuters reporter.
Lahore is considered a cultural hub of the nuclear-armed nation of over 208 million people where militants have been fighting for over a decade against the state in a bid to impose Sharia (Islamic law) in the country.
Lahore has largely been spared the militant violence seen in the country’s northwest which sits at the edge of a lawless mountain range along the Afghan border.
That area has long been home to local and foreign militants from the Taliban and Al-Qaeda, and where Islamic State has lately made footholds.
The Taliban leadership have fled to neighboring Afghanistan from where Islamabad alleges they plan and execute terrorist attacks inside Pakistan.
Washington on Thursday offered a $5 million bounty for the Taliban militant leader, Mulllah Fazlullah, a day after a suspected U.S. drone strike on a training camp in a remote part of Afghanistan killed his son and more than 20 other militants preparing to launch suicide attacks in Pakistan.
The U.S. cooperation comes amid worsening U.S.-Pakistan relations, and coincided with a visit to Washington by Pakistan’s foreign secretary for talks expected to focus on boosting counter-terrorism cooperation and the U.S. strategy in Afghanistan. – Reuters