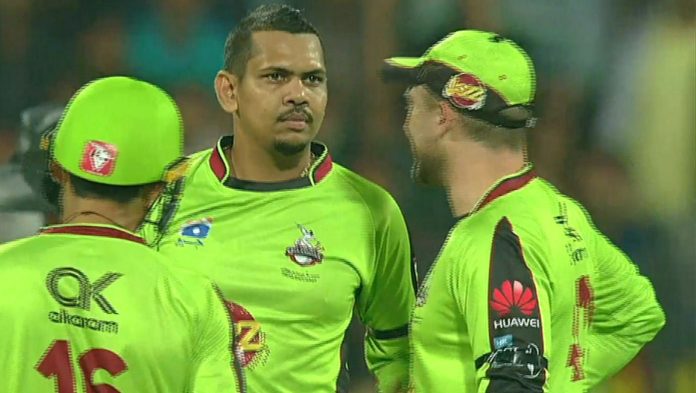 LAHORE: Lahore Qalandars player Sunil Narine has been reported for a suspected illegal bowling action during last night’s HBL Pakistan Super League Twenty 20 game between Lahore Qalandars and Quetta Gladiators at Sharjah Cricket Stadium, Sharjah.
Narine has now been placed on the warning list and may continue to be selected to play and bowl for his team in the PSL, said a spokesman of the Pakistan Cricket Board (PCB) here on Friday.
“As the PSL follows the ICC Regulations on Illegal bowling actions, if a player is reported while on the warning list, the player shall be suspended from bowling for the remainder of the PSL tournament”, he said adding “A player suspended from bowling may continue to be selected to play in matches, however, he will not be entitled to bowl”.
He said the Match Officials Report on Narine’s bowling action will be sent to the West Indies Cricket Board and he will have to go through the process that is followed by the West Indies Cricket Board, for suspected illegal bowling actions. – APP