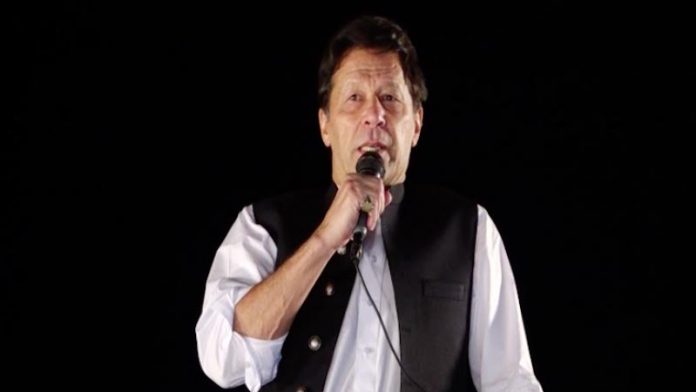 KOHAT— Former prime minister and Pakistan Tehreek-e-Insaf Chairperson Imran Khan has hailed the Supreme Court’s ruling on dissident lawmakers as he called on the top court to hear corruption cases against the Prime Minister Sharif and his family on a daily basis.

In his address to Kohat jalsa, Imran Khan said that the apex court with the verdict on Article 63-A has ensured Pakistan’s morality does not diminish. “Thankfully, the Supreme Court has rejected votes cast by the turncoats who sold their vote and betrayed their constituents and democracy.”

Earlier in the day, in a major development, the apex court had issued its 3-2 majority decision on a presidential reference- seeking interpretation of Article 63-A, ruling that votes cast by members of the national and provincial assemblies against the party line will not be counted in the final tally.

Commenting on the verdict, the PTI chief said that the Supreme Court had saved “Pakistan from losing its values” in front of the world.

He continued his criticism of Prime Minister Shehbaz Sharif and his extended family, accusing them of corruption and for destroying the Federal Investigation Agency (FIA) after taking power.

The former prime minister reiterated that former FIA director, Dr Mohammad Rizwan, had passed away due to a heart attack while another official, who had been probing corruption cases against the Sharif family, had suffered a similar fate due to the “corrupt” leaders.
“Supreme Court judges, it is your responsibility to hear their [Sharif family] cases,” he added.

The PTI chief said if the Sharif family and others manage to secure another National Reconciliation Ordinance (NRO), then “no one will fear looting the country and dacoits will rule”.

Continuing his use of metaphors to describe his groundswell of support and the corner that his opponents find themselves in, stating that the government is living in “great fear now” as they find themselves trapped because “a tiger (Imran) is behind them and the ocean is in front”.

“He [Shehbaz Sharif] desperately wanted to become the prime minister as he never came into power before unlike Nawaz Sharif,” he said, claiming that the prime minister had gotten his sherwani stitched for his oath-taking ceremony a long time before the vote of no-confidence.

Earlier, a stage was built at Kohat Sports Complex where PTI supporters arrived at the venue in the shape of small rallies, headed by Shehryar Afridi and Zia Ullah Bangash, from Kacheri Chowk. Several PTI leaders also addressed a charged crowd before the party chief arrived.

Hours before the rally, rains with gusts had uprooted some of the temporary structures on the ground, but at the same time, it helped give people a respite from the intense heat.
Imran has been campaigning since his ouster which he claimed was the result of a “foreign conspiracy”.

His first anti-government rally on April 13 in Peshawar, saw a big turnout where Imran announced his plan to continue protesting against the newly-installed government until fresh elections were held.