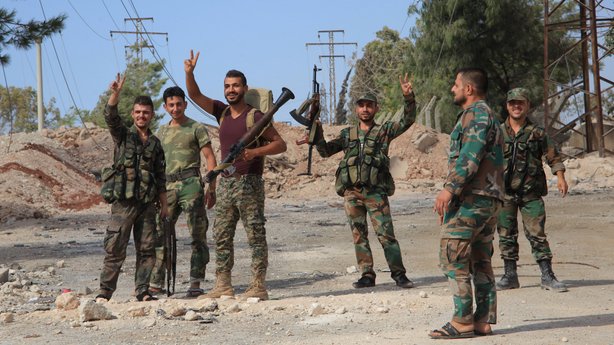 DAMASCUS: The Assad government and armed Syrian opposition have signed a ceasefire agreement and agreed to begin a new round of negotiations to find a political solution to the country’s civil war, Russia’s president, Vladimir Putin, has said.
The ceasefire, which was confirmed by a rebel official, the Syrian army and the Turkish foreign ministry, is due to come into force at midnight on Thursday (2200 GMT).
“We have just received news that a few hours ago the event we have all been waiting for and working towards has happened,” Putin said during a televised meeting with the foreign minister, Sergei Lavrov, and defence minister, Sergei Shoigu.
Putin said three documents had been signed: a ceasefire agreement between the Syrian government and the armed opposition; a list of control mechanisms to ensure the ceasefire would work; and a statement of intent to begin negotiations on a political end to the conflict.
Putin described the ceasefire as fragile and said it would “require a lot of attention”.
Turkey and Russia will act as guarantors, Turkey’s foreign ministry said in a statement, adding that the agreement excluded groups the UN security council deemed to be terrorists. It called on all sides wielding influence on the warring parties to provide the necessary support to halt hostilities.
In Damascus, the Syrian army said the ceasefire came after the “successes achieved by the armed forces,” an apparent reference to the capture of rebel-held neighbourhoods of Aleppo earlier this month.
A senior rebel official said the deal, which was negotiated in Ankara with Turkish and Russian backing, would cover all rebel-held areas in the country.
However, there appeared to be some confusion as to which groups were covered by the truce, with the rebels saying the agreement even includes Jabhat Fateh al-Sham (formerly known as the al-Nusra Front), the al-Qaida-linked group that has been excluded from previous ceasefires.
“A general ceasefire that does not exclude any of the areas under the control of the rebels, and does not exclude any faction in those areas, will go into effect at 12 [midnight] Syria time,” said Osama Abu Zeid, a legal adviser with the Free Syrian Army, who is involved in the negotiations.
Lavrov said talks to implement the agreements would take place soon in Kazakhstan’s capital, Astana, and would involve Russia, Turkey, Iran and possibly Egypt, as well as the parties to the Syrian conflict. At a later stage other players including Saudi Arabia, Iraq and Jordan could be asked to join, he added. He said the US could join after Donald Trump becomes president next month, in order that the countries can work “in a friendly and collective manner”.
The ceasefire will be the first nationwide halt in fighting since a week-long truce from September 12-19 that collapsed after several incidents of violence. A previous truce implemented in February also fell apart. Both of those deals were organised by Russia and the United States.
Putin also said Russia would reduce its military presence in Syria, although a statement in March that Russia was withdrawing its contingent from the country led to no noticeable change.
“We will still offer support to the legal Syrian government in the fight against terrorism,” Putin said. …Agencies