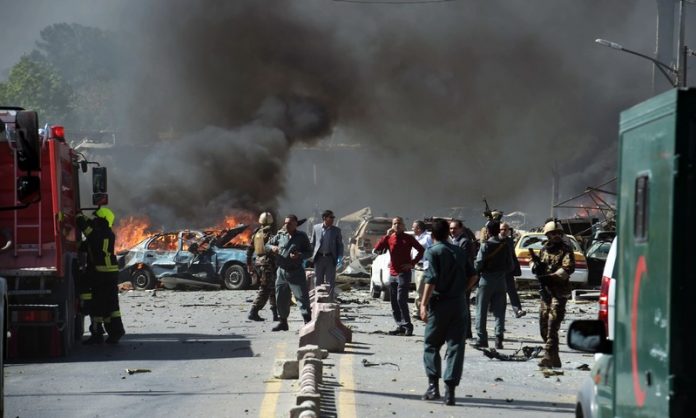 KABUL: A suicide bomber blew himself up on Thursday in the centre of Kabul, the Afghan capital, government officials said, with the blast rattling windows and doors in an area near embassies and government buildings.
The Taliban, who are in the midst of negotiating a pact with the United States, claimed responsibility.
It was not immediately clear if there were any casualties in the attack, by a checkpoint on a main road near the headquarters of Afghanistan’s NATO force and the US embassy.
“Ambulances and rescue teams are being rushed to the blast site,” Interior ministry spokesman Nasrat Rahimi said.
Video footage and photographs posted on social media showed several cars and small shops ripped apart and police cordoning off the road.
There has been no let-up in violence in Afghanistan even though Taliban and US officials have been making progress in negotiations aimed at securing a deal on a US troop withdrawal in exchange for Taliban security guarantees.
On Monday, a Taliban suicide truck bomber attacked a compound used by international organisations in Kabul, killing at least 16 people and wounding more than 100.
The US top negotiator for peace in Afghanistan, Zalmay Khalilzad said this week the two sides had drawn up a draft framework agreement under which US troops would leave five military bases in Afghanistan within 135 days of the signing of the pact.
There are some 14,000 US troops in Afghanistan, deployed at various bases across the country.
Khalilzad is expected to meet Afghan and NATO officials to explain the draft agreement, which must still be approved by US President Donald Trump before it can be signed.
Khalilzad, a veteran Afghan-American diplomat, has shared details of the draft with Afghan President Ashraf Ghani, and sought his opinion before firming up an agreement that could bring an end to Americas longest military intervention overseas.
But Ghani’s government is seeking clarifications from the United States on the draft agreement.