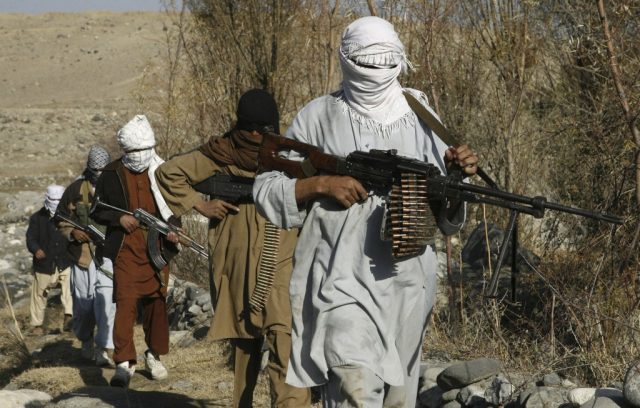 HERAT, Afghanistan: Taliban fighters attacked Afghan bases in the western province of Farah, killing more than 30 police, officials said on Friday, as the insurgents stepped up their offensive in a region with vital opium smuggling routes into neighboring Iran.
Farid Bakhtawar, head of the Farah provincial council, said fighters had stormed a police base overnight in Balabuluk, a district that has been under heavy pressure for months, killing at least 23 and wounding three.
In a separate attack in Farah city, Taliban fighters killed 11 police and seized a large quantity of weapons and equipment, he said.
The latest violence underlines the extent of the pressure faced by the Western-backed government of President Ashraf Ghani, already heavily criticized for a spate of suicide bombings in the capital, Kabul.
Last week, Taliban fighters, who challenge government control in almost half the country, seized a district in the northern province of Baghlan and there has been heavy fighting in areas from Faryab in the northwest to Ghazni, south of Kabul.
Farah, a remote and sparsely populated province between Iran to the west and the Taliban heartland of Helmand province in the south, has been a key battleground for the insurgents for months, with heavy fighting in Balabuluk district.
The region covers major smuggling routes into Iran from Helmand, source of much of Afghanistan’s opium crop.
Afghan special forces, backed by air support, have been heavily involved in the fighting but have been unable to prevent repeated attacks by the insurgents.
Farah’s governor resigned in January, claiming political interference and corruption, and residents have complained bitterly about security in the province.
Since the Taliban announced the start of their annual spring offensive last month, fighting has been intense in many areas of the country and it is expected to pick up further once the opium harvest is completed in coming weeks.
Violence has also increased around voter registration centers set up ahead of parliamentary and district council elections that are due in October.
U.S. and NATO officials say Afghan forces, backed by thousands more U.S. military advisers and intensified air strikes, have been steadily improving and are matching and beating the Taliban.
However a recent report by SIGAR, a U.S. Congressional watchdog, said that the number of Afghan security forces personnel had fallen by 11 percent over the past year, even as fighting has intensified. Police, army and air force numbers were almost 40,000 below the authorized strength of 334,000, the report said.
The report showed the government controlled areas with about 65 percent of the population and controlled or influenced 56.3 percent of districts, the second lowest level since 2015, the first year after most international forces left Afghanistan.– Reuters