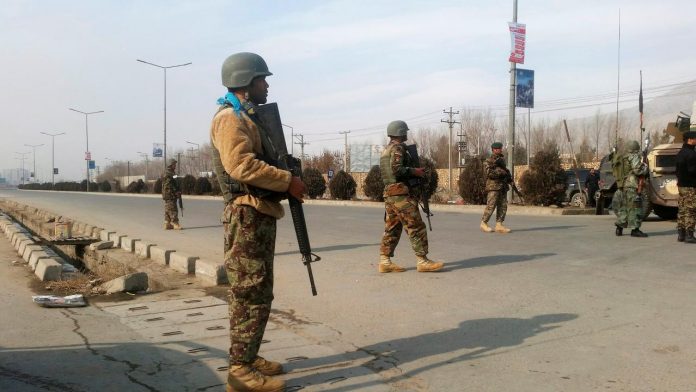 KABUL: The Taliban has launched an attack on an Afghan government compound in western Badghis province, killing at least 20 soldiers and policemen, officials said.
The “massive attack” began before dawn on Thursday, targeting the local government’s headquarters in the district of Bala Murghab, according to Mohammad Nasir Nazari, a member of the provincial council.
The Taliban first stormed all the security posts around the compound, he told The Associated Press news agency.
The attack put the lives of some 600 members of the security forces deployed there at risk, he added.
Jamshid Shahabhi, spokesman for the Badghis governor, said intense fighting was still under way on Thursday afternoon.
The Taliban claimed responsibility for the attack in a statement to local media.
The armed group controls or contests nearly half of Afghanistan, the most since US-led forces removed it from power in 2001, according to the US Special Inspector General for Afghanistan Reconstruction.
Its attack on Badghis came amid talks with US officials to end the South Asian country’s 17-year war.
US peace envoy Zalmay Khalilzad has held several rounds of talks with the Taliban, most recently in March in Qatar where both sides said progress has been made.
The start of the next round has not been announced, but is expected this month.
During a visit to Kabul on Monday, Khalilzad called for “intra-Afghan dialogue” – talks that would encompass prominent Afghan figures, government representatives and the opposition, as well as the Taliban.
But despite the talks, the Taliban stages near-daily attacks on Afghan forces, inflicting staggering casualties. The armed group refuses to talk directly with the government in Kabul, considering it a US puppet.
The Taliban says it is fighting to expel foreign troops, topple the Western-backed Afghan government and restore its version of Islamic law.
In March, some scores of Afghan forces were killed in two attacks in Badghis and Helmand.
On March 23, 13 civilians, including 10 children, were killed in a US air attack in Kunduz, while more civilians died in a Helmand stadium attack by the Taliban.
NATO’s Resolute Support Mission said 94 Taliban fighters died in a single battle near Kunduz city. Two US soldiers were also killed in the province in March. …Agencies