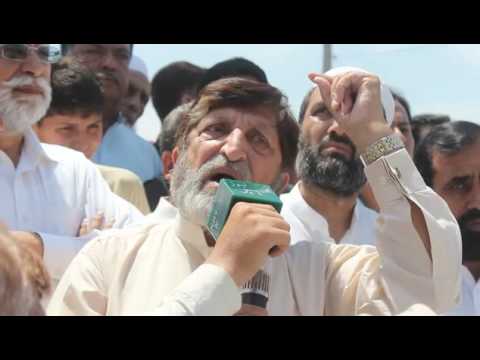 PESHAWAR: Pakistan Tehreek-e-Insaf (PTI) MNA Usman Tarrakai said that they have been victim of a conspiracy.
Usman Tarakai said that Prime Minister Imran Khan was presented with wrong facts regarding differences and grouping in the province. He said that they have also made sacrifices for the party and fully trust Imran Khan.
He rejected reports of formation of forward bloc and said that they will remain associated with PTI. However, he expressed concerns about Chief Minister’s decision making process.
He said that Atif Khan and Shahram Tarakai were not allowed to present their point of view.
He further claimed that provincial ministers and MPAs do not have administrative powers.
Earlier in a shocking political development, three provincial ministers of Khyber Pakhtunkhwa (KP) including Muhammad Atif Khan, Shahram Khan Tarakai and Shakeel Ahmad were removed from the provincial cabinet.
Talking to a private TV, Atif Khan asserted that he knows those who are behind the conspiracies but he will not name them yet.
Shakeel Ahmad expressed that they have never violated discipline of the party in seven years of their service. He said that people should ask the reason from those who ousted them. He added that he went to Hayatabad for a dinner and not a meeting, where Khan, Tarakzai and other few people were accompanying him.
Atif Khan also said that they did not go to the meeting to conspire against CM Mahmood Khan, and they cannot remove the provincial CM when he is backed by PM Imran. He said that the matter is in the hands of KP CM and Defence Minister now.
Tarakzai also refuted the allegations and said that their stance was not even heard in this issue. He added that others benefited from their fights within the party, and no one listened to them when they emphasized on reform to remove the hurdles.