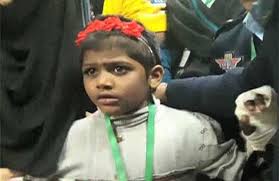 ISLAMABAD: The Supreme Court on Tuesday rejected the out-of-court settlement in Tayyaba torture case and ordered police to collect evidences till Feb 15.
A three-member bench, headed by Chief Justice Mian Saqib Nisar, rejected an application of accused judge Raja Khurram Ali Khan pertaining to the settlement between him and the victim’s parents.
The chief justice observed that the application seeking to allow the parties involved in the case to reach an agreement lacked merit.
In February last year, father of 10-year old housemaid Tayyaba forgave the judge and his wife accused of torturing his daughter.
It should be noted that Tayyaba torture case came to the fore when the pictures of the 10-year old girl went viral on social media.
The internet users claimed that the maid worked at additional session judge Khurram Ali Khan’s house and was subjected to severe torture by the family she worked for.
Chief Justice of Pakistan Justice Saqib Nisar had taken suo motu notice of the case of torture on the 10-year old.